It’s time for our 185th Ask DST Q&A with DSTChuck, and this time it’s all about Star Trek! Ready? Energize!

Jon Jones
Hi, I was wondering why the new ships only include one button for multiple sounds? It would make more sense to have a button for each sound as even the old Playmates ships had that. I know some people will feel that the buttons have to be “disguised” somehow so as not to effect the look but I’m sure that it could be done.

DST CHUCK: Jon I think that’s just an opinion and as we’ve said we can’t make everyone happy with everything we decide. Overall, I think if you really look at it though our ships are nothing like the one Playmates did and in fact are pretty different than the AA ones. One difference is the batteries; we use standard batteries for the most part as opposed to button cells so that is a factor and from what we have heard lots of fans like the display mode when the lights stay on when we’ve done it. So bottom line we like the one button much more than multiple – sorry you do not.

Stephen
The Wrath of Kahn Collectables are great, but it is hard to find the Original Series Trek Teks anymore. On that note, fans might like to see some of the Next Generation and Beyond Trek Tek.

DST CHUCK: Stephen, I think the most frequent compliant I hear is we push TOS too much so I guess it’s true – to each their own… You can be sure we’ll not forget about TOS anytime soon!

Rob Brown
in response to you saying that the vina and chapel retro figures are not going to be produced – can i please ask you to reconsider . you have addmited yourselves that there is a lot of interest in the chapel and also a janice rand figure . i for one never thought i’d any star trek retro figures again let alone sulu and chekov , chapel and rand are much desired to complete the crew . i remember you once commented that the hair was a problem , chapel had mant different hairdos surely you can recreate one of them or if it’s such a problem give them moulded hair like their male counterparts – in rand’s case i think that would be the only option anyway . the only way we will ever get our wish of a mego chapel and rand is you produce them – your our only hope ! if there is a demand for them surly it’s worth producing them , i know you wont disappoint .

DST CHUCK: Aside from interest I just don’t think we or our factory can do those figures just right SO for now they are on the back burner.

Marty Chamberlain
I read in this last ask DST that you answered one of the questions saying that the only Excelsior your planning is the Enterprise B, then further down you said that when the B is done you’ll start working on the normal Excelsior. I’m just hoping to get some clarification as to what your actually planning in regards to Excelsior. Also, I’d like to put my vote in for making either the Enterprise C, or Voyager as your next ship.

DST CHUCK: I think what I was answering was would our Excelsior be a 100% new sculpt or at least partly based on the B. SO for the record YES we are working on the Excelsior (as we have said) and YES it will have all new sculpted parts but YES it will include some of the parts from the B. Frankly, that is the only remotely possible way for us to afford doing both the B and Excelsior. I hope everyone will be happy with both ships when it’s all said and done.

DST CHUCK: Nothing to comment on at this time.

Andy T
Hello! I can’t believe I don’t see this question come up more often… Are there any plans to tackle the TNG tricorders and phasers? Thanks!

DST CHUCK: Right now no plans BUT we have not started the next item after the Disruptor so we’ll see.

Arthur Chester
Hello again, Chuck! i need to get confirmation on some things that are floating out there with no official word as of yet. Without the landing gear, I considered the BoP to be incomplete and I cancelled my preorder. There has been talk of an HMS Bounty version that would include the gear, so I am hoping that maybe you can confirm that DST is at least considering it? I know it hasn’t hit shelves yet, so I’m hoping that you may be a little farther along than “it depends on how the first one does.” Also, word around the campfire is that the Enterprise-E re-release will have upgraded lights along with the paint changes. It is supposed to have LED’s this time around, and to my surprise, the blue nacelle strips are finally going to be lit. Is this true, or is it just a repaint with no electronic updates?

DST CHUCK: The Trek 3 – HMS in other words – version will have the landing gear, the other version will not. I do not think that has changed since we started developing the item but they have been in work so long I can see where some confusion might come up. I think the answer we have given is we’re doing what we can do to alter / improve the E aside from new tooling.

Adam Miatke
Hi, I just wanted to clarify something from your last Q&A. You said in response to two questions that “We’ll get hard at work on the Excelsior as soon as the B is done so soon but not SUPER soon” and “right now the only Excelsior we have planed will be based on the sculpt we have for the B”. Does this mean you’ll be using the Excelsior Refit model to represent the Excelsior? If so…it’s not going to work, it would be like using the original series Enterprise to represent the Enterprise-A. On a sidenote I noticed that someone is really pressing for the Enterprise-C – please don’t, it’s such an incredibly niche item I can see it flopping badly at retail. So little Trek exposure (only one episode of TNG) versus seven years of Voyager or five years of the Defiant. Actually on those, if you did a Defiant, would you consider possibly a Defiant (NCC-75633) limited edition variant?

DST CHUCK: Adam not sure how you can be sure something will not work when you have not even seen it but time will tell. As for which ship is next I think you can tell from just these Q&A that it is never as simple as “the fans want” or “all collectors will buy”, but we’ll keep doing the best we can to make cool items that sell.

Jeremiah Childers
I recenlty bought the Star Trek Nemisis Enterprise E Ship on Amazon.com.  Amazon does not have a release date and was wondering when it would be released.  I was unaware that is was a pre-order purchase when I ordered it, but am aware now. (I did not look hard enough, my bad.)  I am excited about the product and would like to know when I might be expecting it.

DST CHUCK: Looks like E will be early next year.

Dave C.
I recently saw in the new ship date post that a re-issue of the tricorders are on the list. Will the screens on those have more even lighting on the screens? The original releases were lit only from the right side and in my opinion were the only disappointment of the tricorders.

DST CHUCK: I do not think I have seen a revised Tricorder yet.

Arthur Chester
Chuck, I wonder if you can shed any light on the Art Asylum Enterprise-A in this link. Is this a genuine version, or a scam?

DST CHUCK: AA made a ship they branded as the A years ago as to how many were at the show and how limited it is or if this listing is “authentic” I am not sure we can help you.

Donald Bates
Was there a 16″ Battlestar Galactica statue that was only released to cast and crew, or were both the gold and chrome versions available to the public?

DST CHUCK: I THINK one of them was a gift but I think one version was an AFX exclusive a few years ago.

David Ellis
Hi Chuck! Would you considder any shuttle crafts or Runabouts from Star Trek?

DST CHUCK: I do not think they would be near the top of our list – sorry.

Andrew Griego
Are you guys planning on doing the U.S.S. Reliant for STII:TWOK?

DST CHUCK: I do not think we have ever commented on which ship we are doing next.

DST CHUCK: No new retro are officially on the drawing board, we’ll see how Mirror and TNG sell before we go further. 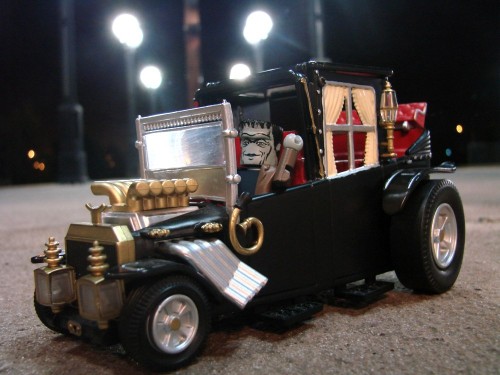 Next Up: The Munsters Minimates Get Moving in the New Minimates Koaches!