And now… answers to your Star Trek questions with DSTChuck!

Maelstrom Janus
Hi Thanks for answering one part of my question about the forthcoming Horta which I’m looking forward too. However I’m still wondering about my suggestion for models of Nomad the robot and Yarnek the lava creature. Long overdue these two in my opinion…. Incidentally have you guys thought about some classic Doctor Who stuff next year ( 50th anniversary of the Doctor ) trying to get someone to produce quality replicas of the classic monsters is a nightmare and I’m sure you guys would lap up the Doctors opponents from the 60s to the 80s….

DST CHUCK: No other “Creatures” are planned. They could be part of some future Select Trek figure but none are as of now. We have talked to BBC from time to time about Dr. Who but nothing has come of it to date.

David Ellis
Hi Chuck, thanks for all your answers. 1) Have you considered what your next alien ship will be depending on sales of the Klingon Bird of Prey? 2) Regarding the Klingon Bird of Prey, will you be doing an IKS Rotarian, General Martoks Bird of Prey from Deep Space Nine with Martok and Worf quotes added to it? 3) How come’s theres no picture of General Chang on your Klingon Bird of Prey packaging? 4) Have you considered asking CBS at getting Juan Ortiz (the guy doing the QMx Star Trek retro posters at the moment) or another Star Trek artist to do some artwork for you’re packaging to give it a unique “CBS APPROVED” Uniformed look? I’m sure your designers to the best they can with what CBS want but the thing that strikes me about Star Trek packaging (not just DST) is that its soooo dull when it could be amazingly cool and like TOS, funky! I don’t know if this is a question I need to ask CBS Consumer Products but it just seems like there’s an opportunity to put something on the shelf that is unique to Trek and eye catching to your average joe geek. 5) Whats the current status of your re releases? Will DSTZach be videoing each of them and what one (besides the Enterprise E) do you expect to hit the shelves first? Gotta start saving my coins. 6) PLEASE PLEASE PLEASE PLEASE underscore and bold text, convince CBS Consumer Products to give you a license for the new Star Trek movies. you would offer product for people not willing to buy Kreo and people who aren’t rich enough to afford even the “affordable” QMx ships as well as make available to the loyal customer base you have by continuing the line of Star Trek toys into the new and current Trek’s, also also I couldn’t hurt your sales since I’m sure that by making Star Trek stuff off of the most recent movies would increase the profile and the opportunity to market the classic Trek stuff you’ve got planned. I would just like it for once to have a line of toys from all aspects of Star Trek from just one company. Finally just a quick thank you to DST Zach and yourself for taking the time and responding to topics over at www.trektoy.com. Much appreciated to have that level of dedication to the most dedicated fans in the known galaxy.

DST CHUCK: hey David – lots of questions this week, have you been saving them up?

1) We have not decided on the next ship but if I had to guess it would NOT be an alien ship and you are correct if the BoP does great we know there is enough interest in alien ships to make more.

2) As we’ve said there are no ships or role play in development right now – aside from what you have seen..really not kidding.

3) The style guide for Trek product are very strict, more so than when we started so we follow what CBS has provided.

5) Lots of Trek stuff is in production or on a boat on the way to LA I think DSTZach plans to keep you folks as updated as he can. I have NO idea if he has more movies planned but safe to ASSUME so if fans are telling him they like them and find them helpful.

6) Sorry we are very happy to still be doing classic Trek but CBS has made clear they want the movies with someone else both times. DSTZach has been a great addition to our team and glad he is keeping you guys informed – just don’t forget just because you might only see our names out there it’s a team effort.

Tim S
Hi Chuck, I just want to say that I do have most of the ships that you guys have produced and they are absolutely awesome. I know you don’t talk about your next ship but I would really like to see a Klingon Battle Cruiser from the motion picture and ST VI. With the BoP coming out it would be a really good fit and no one has ever done one. Keep up the great work and I look forward to seeing the new ships thanks.

DST CHUCK: I don’t see us going back to back on Klingon ships to be honest with you so I hope the BoP makes a nice addition to your collection and holds you over until our next ship.

Adam Miatke
Hi, I just wanted to clarify my comment regarding basing the Excelsior on the Enterprise-B model not working. It all depends on how much it’s modified – a straight re-paint won’t work as there were model changes applied to the Excelsior model to turn it into the Enterprise-B including: – an extra set of impulse engines on the saucer section – flares on the side of the engineering hull – new caps on the front of the warp nacelles – fins on the back of the nacelles

DST CHUCK: Adam I did not take it as bashing, I answer every question the fans take the time to write, however I do think its silly to judge any product before you have it in your hands (though I bet we are all guilty of this to some extent). If it makes you feel better NO the Excelsior will NOT just be a repaint of the B – there ARE new parts.

Mike Griffin
Hi Chuck! My question is more of a suggestion for the Select Line. I Love the two classic ones shown and think there is HUGE Potential for a Tasha Yar vs. Armus in this line. Tasha was one of the characters that did not make it into the TNG line. With the two sets of legs, one could be her standing there holding a phaser, the other of her flying through the air. Like with Spock, he will have the two heads, well one of Tashas could have the black splotch. I truly love your work and Tasha has not gotten the luxory of an awesome action figure, i really hope this could be possible option but i realize you prolly have another Captain in mind next.

DST CHUCK: We do not have Tasha planned yet BUT we are only working on one design at a time – we’re going along based on how sales are so its possible we could do a Tasha but to be honest I don’t see her being in our top ten.

James White
I have a quick question about the select line (which is an awesome idea btw). I know TOS and Kirk and Spock sell. I have no problem with that and will buy every version you put out BUUUUUTTTT… Does it always have to be actual TOS uniforms? How about giving some TOS movie love. Kirk Battling Kruge or Spock in robes in his quarters Or even Kirk or spock in the ST V assault uniforms. Does it always have to be standard TOS? If not the here is my offiical request for two figures. Kirk from Generations in his captains vest with a wood chopping diorama and Picard from Generations in the DS9 Voyager style uniforms with an expanded piece of the same base. Thanks for taking time to answer these.

DST CHUCK: I think yes to kick off we do them in the “standard” uniform but a complaint we have had in the past is we do too many version of Kirk and Spock so hard to make everyone happy. We do know if we want a line to extend it needs to be more than ToS and Kirk and Spock – its just a matter of how deep can you go and how many K&S are too many.

Sebastian Horstmann
Hello from Germany! Great job you’re doing on Star Trek! Can’t wait to get my hands on the Enterprise E. But my question is about your new Star Trek Select line. Which TNG figures do you want to release, are they maybe Picard, Data or Worf?

DST CHUCK: I think the TNG you list would top our list but I am also a big fan of the Borg and a few others.

Sam Washington
I am glad you are rereleasing ships (the secondary market is murder). Do you plan on releasing the NX-01? I truly hope so. Any plans on making a Voyager? Again thanks for releasing the ships…I just ask that you consider there are some people who missed them all the first time. Please consider that perhaps we would like them all (and new ones) so teasing us with a few is “cruel.” Keep up the great work!

DST CHUCK: I do not think the NX-01 is in our immediate plans sorry. I do think there is some balance between an item being collectible and meeting the demand so I hope we’re able to do both. 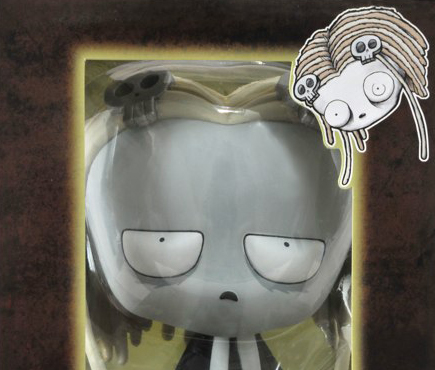 Next Up: Lenore, the Cute Little Dead Girl, is On Her Way! (Everybody Hide!)