The third Iron Man movie is almost upon us, and the trailers are promising plenty of action and drama. Well, Diamond Select is promising toys! Not only will there be two new movie-based figures coming to the popular 7-inch-scale Marvel Select toy line, there will also be an assortment of Marvel Minimates, the 2-inch mini-figure line that’s celebrating its 10th anniversary in 2013!

This spring, collectors will have a chance to pick up Marvel Select figures of Iron Man in his new armor, as well as War Machine in his new “Iron Patriot” paint scheme. Each figure will stand over 7 inches tall and feature 16 points of articulation, as well as an interchangeable unmasked head of Tony Stark and James “Rhodey” Rhodes, respectively. Both will be packaged in the famous Marvel Select shelf-ready packaging, with character artwork on the spine. Images of the toys are under wraps until a later date, but you can pre-order them now, or keep checking our Facebook page for updates. Like your toys a little smaller? The newest assortment of movie-based Minimates (designed by Art Asylum) will include two 2-packs shared between comic shops and Toys “R” Us, Iron Man with the Mandarin and Iron Patriot with a top-secret figure. It will also include two specialty store-exclusive sets, War Machine with Maya Hansen and Aldrich Killian with Cowboy Tony Stark, as well as two TRU-exclusive sets to be revealed later! We can’t show any of them to you, but we can say that each Minimate stands 2 inches tall with 14 points of articulation and a variety of removable and interchangeable parts and accessories. Pre-order the specialty assortment today at your local comic shop, and be on the lookout for photos! 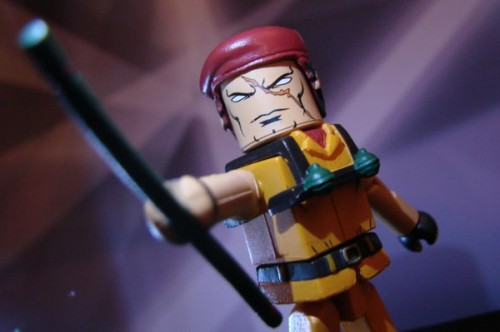 Next Up: Round 2 of Street Fighter X Tekken Minimates is About to Commence!