The ranking was based on toy sales to over 3,500 comic book shops and specialty stores serviced by DCD, primarily in North America. DST’s strong year was driven by successful product lines for several prominent licenses, including The Walking Dead, Marvel’s The Avengers, The Amazing Spider-Man, Marvel Comics, Knight Rider, Universal Monsters and The Munsters.

“This was a great year for us, creatively,” said Chuck Terceira, Director of Diamond Select Toys. “Not only did we get to work on some of the most exciting new properties of 2012, we also raised the bar on our evergreen product lines. Our product development team is always finding ways to improve on our past products, making the new ones even better, and the continued high level of support from both retailers and customers has been very much appreciated.”

The Marvel Select action figure line saw some of its most popular releases ever in 2012, including characters based on Marvel’s The Avengers and The Amazing Spider-Man, the year’s #1 and #6 top-grossing movies, respectively. Citing their sculpting and articulation, many fan sites are calling DST’s film-based Spider-Man and Hulk figures two of the best action figures of 2012. Both films also received lines of Minimates mini-figures, and DST’s collectible busts of the Amazing Spider-Man characters have been praised for their size and detail.

A line of Minimates based on the comic book The Walking Dead got off to a strong start in 2012, with Series 1 selling out at comic shops nationwide, alongside a vinyl bank based on one of the book’s many zombies. Electronic vehicles and Minimate vehicles for Knight Rider and The Munsters performed well for DST, and their new assortments of Munsters Select and Universal Monsters Select action figures have been embraced by both old and new fans.

“Our goal next year is to do even better,” said Terceira. “Work has already begun on products for the Iron Man, Thor and Wolverine film franchises, the new Tomb Raider video game and our 50th series of Marvel Minimates, and it’s some of the best product we’ve ever done. Our line of electronic Star Trek ships and role play items returns this month, and we’ll be relaunching the Star Trek Minimates line later this year. We also have some exciting new licenses that I look forward to unveiling at Toy Fair International next month.”

ABOUT DIAMOND SELECT TOYS AND COLLECTIBLES, LLC DIAMOND SELECT TOYS AND COLLECTIBLES, LLC was founded in 1999 by sister company Diamond Comic Distributors, Inc. Envisioned to create unique and exciting collectibles for children and adults alike, the company has licensed a variety of pop culture properties to be turned into merchandise. In 2007, Diamond Select Toys acquired select assets of the New York based Art Asylum, creators of the global Minimates brand. Minimates have been recognized as the #1 selling block figure in the world and were the first toys ever to be inducted into the ToyFare Hall of Fame in 2007. With partners such as Marvel Enterprises, Microsoft, Universal Studios, Twentieth Century Fox, MGM and Sony Pictures, Diamond Select Toys and Collectibles produces a large range of products based on a wide variety of properties, and is headquartered in Timonium, MD. For more information, visit www.diamondselecttoys.com and www.artasylum.com 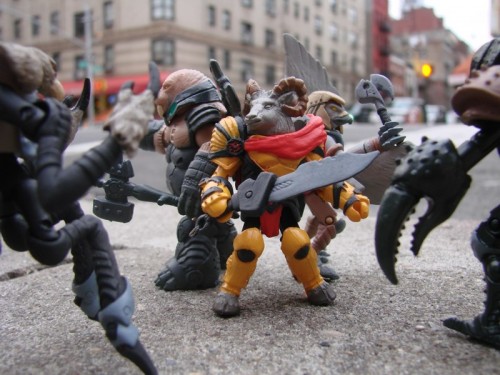 Next Up: On Sale This Week: Battle Beasts Minimates Series 1!