Diamond Select Toys certainly does get around. New York Toy Fair brought them to the East Coast in February, and San Diego Comic-Con will have them headed to the West Coast in July, but in between they get to spend a fun-filled week in one of their favorite cities, Chicago! The Chicago Comic and Entertainment Expo (C2E2) will take place from April 26 to 28 this year, and DST will be exhibiting, paneling, freebie-ing… you name it! At booth #603, DST will have all (well, most) of their upcoming products on display, so you can check them out in person before they reach the stores. They’ll also be giving away free posters, and selling selected items in the company store. Spend $18 and you can build your own Minimate at the Build-a-Minimate station! (Station opens at 1:00 each day.) Not too far away, at booth #1509, you can check out the Minimates Museum, an exhibit of Minimates past and present celebrating the 10th anniversary of the Marvel Minimates line. The exhibit will be open during show hours, so stop by, pick up a program and take a trip through mini-history, from Lord of the Rings to The Expendables, and everything in between! And on Saturday, at 12:15 pm, in Room W470a, DST Marketing Supervisor Zach Oat will talk Minimates with anyone who will listen. He’ll unveil never-before-seen artwork, debut some never-before-seen product and answer some never-before-asked questions! Plus, he’ll give away a prize at the end to one lucky attendee! 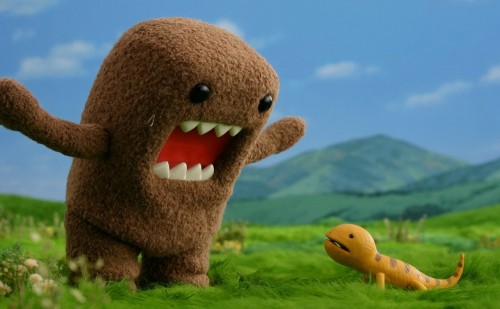 Next Up: Coolest Bottle Openers Ever, Part 1: Domo!