Diamond Select’s fleet of electronic Star Trek ships is undergoing a rapid expansion of late, and two new starships are preparing to join fans’ collections! First up is a limited variation on the U.S.S. Enterprise E – the First Contact edition! With a new, detailed paint scheme based on Star Trek: First Contact, this new E is visually distinctive from our regular edition, which is based on its appearance in Star Trek: Nemesis. With the same great lights and sounds as the previous E, including commands from Captain Jean-Luc Picard, it will be a striking addition to any fan’s collection, and will be ready to ship this summer. Then, coming this fall, the U.S.S. Excelsior, registry number NCC-2000, is finally joining DST’s electronic Starfleet! Measuring 16 inches long, the Excelsior (based on its appearance in Star Trek VI: The Undiscovered Country) features new sculpted parts to differentiate it from the Excelsior-class Enterprise B, while maintaining the same great light-up features! The sound files are all-new, as well, with plenty of great quotes from Captain Hikaru Sulu, using the actual voice of actor George Takei. Check out the video below to hear all of the great sounds, and pre-order both ships today! 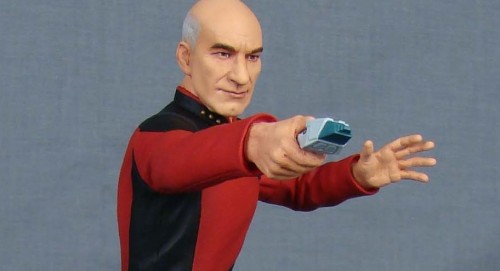 Next Up: Captain Jean-Luc Picard is the Next Star Trek Select Figure from DST<...