Comic shops and online retailers around the world have been given a sneak peek at August’s Previews catalog from Diamond Comic Distributors, and now we’re giving you one, too! DST has several new items up for pre-order now, with release dates ranging from this fall to early 2015. Check out our newest Batman TV bust, Star Trek starship, My Little Pony Bank, Bluntman & Chronic Retro and Sin City Minimates, plus our first ever electronic robot from Lost in Space! 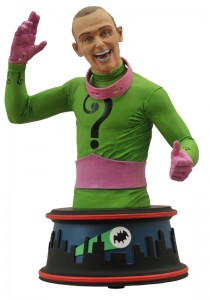 Batman Classic TV Series Riddler Bust Riddle me this, riddle me thus — who will be the next Batman TV bust? The Riddler, as played by Frank Gorshin, is the fourth in DST’s line of resin busts based on the Batman Classic TV Show! Joining the Joker in the ranks of Batman’s greatest foes, this bust of an unmasked, unhinged Riddler measures approximately 6 inches tall atop a base inspired by the show’s famous opening animation. It’s the answer to what to get if you’re a Batman fan! Packaged in a full-color box. Designed by Barry Bradfield! Sculpted by Jean St. Jean! Coming this winter! (SRP: $59.99, item #AUG142280) 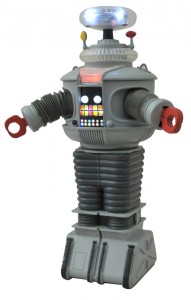 Lost In Space Electronic Lights & Sounds B9 Robot Danger, Will Robinson! DST is known for their incredibly detailed electronic cars and starships, and now they’ve built their first-ever electronic robot! This 10-inch rendition of B9, the friendly helper robot from Lost in Space, features lights and sounds taken straight from the classic sci-fi TV show. Lights on his head and chest blink constantly while B9 is on, and additional lights and dialogue are triggered with the push of a button, including “I will accompany you, you may need protection,” “Cannot compute, programming data insufficient,” and his famous cries of “Danger!” You can also manually raise and lower his head, open and close his claws, extend his arms and turn his torso to the left and right. He even has wheels so you can roll him around! Comes packaged in full-color window box with try-me feature. Coming in 2015! (SRP: $49.99, item #AUG142281) 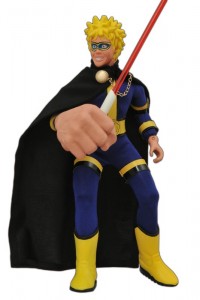 Jay & Silent Bob Strike Back Cock-Knocker Retro Action Figure  Originally made in 2001 for the release of the Bluntman & Chronic movie, this 8-inch, cloth-costumed figure of Cock-Knocker was believed lost forever… until now! Rescued from the DST warehouse and being sold for the first time anywhere, Cock-Knocker is in-scale to Bluntman & Chronic, has one giant fist and an energy sword, and is the missing piece in any Bluntfan’s retro-style figure collection! Comes in resealable clamshell packaging with full color artwork. Designed and sculpted by EMCE Toys! Coming this fall! (SRP: $19.99, item #FEB148248) 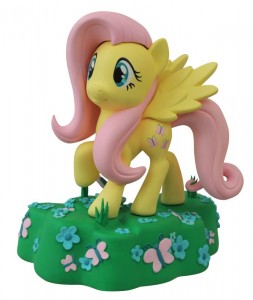 My Little Pony Friendship is Magic Fluttershy Vinyl Bank The newest line of vinyl banks from Diamond Select Toys continues with the kind-hearted Fluttershy! With this 7″ bank, you not only get a detailed representation of the animal-loving pegasus from My Little Pony: Friendship is Magic, with high-quality sculpting and paint applications, you also get a durable vinyl bank, with a coin slot for change on the base and an access door underneath! Comes packaged in a clear polybag. Coming in early 2015! (SRP: $22.99, item #AUG142284) 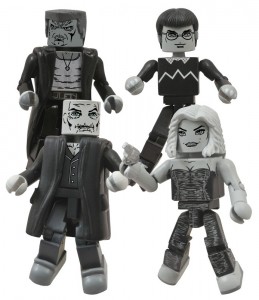 Sin City Minimates Series 2 Hard Goodbye Box Set They killed Goldie. And now they’re gonna pay. Marv barrels his way into the Sin City movie line, with a four-pack of Minimates based entirely on his storyline, “The Hard Goodbye”! With Marv, Wendy, Kevin and Cardinal Roark in one box set, this is guaranteed to be one of the most hard-boiled Minimates sets ever made! Each Minimates mini-figure stands 2 inches tall and features a variety of interchangeable parts, weapons and accessories. Comes packaged on a full-color blister card. Designed by Art Asylum! Coming this fall! ($19.99, item #AUG142282)

Star Trek Undiscovered Country Enterprise A Electronic Ship Finally, the Enterprise-A is getting ready to leave spacedock! This 16-inch model of the U.S.S. Enterprise NCC-1701-A features all-new lights, sound and paint, all based on the ship’s appearance in Star Trek VI: The Undiscovered Country, making it the perfect companion to DST’s Klingon Bird of Prey and U.S.S. Excelsior ships! Add the A to your Starfleet this winter! Comes packaged in full-color window box with try-me feature. Coming in early 2015! (SRP: $65.00, item #AUG142285) Find your local comic shop at comicshoplocator.com! 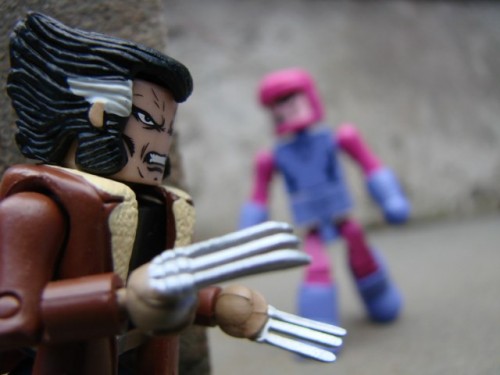 Next Up: X-Men: Days of Future Past Minimates Box Set Gets New Photos!