Get ready to dig into the trenches! After conquering the XBox One and PC platforms, the highly-rated Plants vs. Zombies: Garden Warfare is coming to the Playstation 4! Now all Playstation fans will be able to play the newest mine-blowing adventure from Popcap and EA, which delivers the depth of a traditional online shooter blended with the refreshing humor of Plants vs. Zombies. And soon there will be a whole new way to play: with action figures and Minimates from Diamond Select Toys! The toys hit stores next month, and DST is giving you the chance to win a set as soon as they launch! Next month, DST will launch this line of “bloom and doom” action figure two-packs at comic shops, specialty stores, and Toys “R” Us. Each set of two 5″ scale action figures will include one plant and one zombie, both based on designs from Plants vs. Zombies: Garden Warfare! The assortment includes: – Gatling Pea with Scientist Zombie – Camo Cactus with Foot Soldier Zombie – Chomper with Engineer Zombie – Shadow Flower with All-Star Zombie Additionally, two box sets of Minimates mini-figures will be available in early September, one at Toys “R” Us stores and one at comic shops and specialty stores. Those two sets include: Toys “R” Us set: – Foot Soldier Zombie, Scientist Zombie, Chomper, Sunflower, and two Pea Shooters Comic shop/specialty stores set: – Engineer Zombie, All-Star Zombie, Cactus, Sunflower, and two Pea Shooters Want to win a set of all eight figures and both sets of Minimates? Simply share one of the above photos on your Facebook, Twitter, Pinterest or Google Plus page, and send your name, address, and a link to the page to collectdst@gmail.com! The winner will be drawn on September 1, 2014, from all eligible entries, and that person will get sent a complete set as soon as they arrive in the DST warehouse in September! Enter as many times as you like — each picture posted and link e-mail sent counts as one entry! Good luck! Find your nearest comic shop using the Comic Shop Locator! 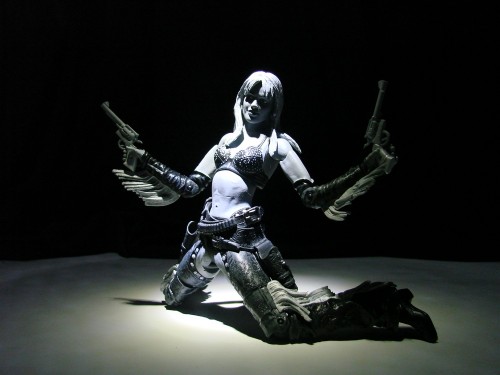 Next Up: Jessica Alba’s Sin City Select Action Figure is in Stores Now!