Open all hailing frequencies! It’s time for Diamond Select Toys president DSTChuck to answer any and all fan questions about Star Trek! Who mourns for Adonais? How many lights are there? What does God want with a starship? These answers and more, straight ahead! Michael S. Chuck, I’d like to thank you for answering one of my previous questions. I’ve been waiting for another ASK DST posting to see the new answers to questions. Now that its come (DST 261), I thought I’d do a follow up on one of my other questions. Here goes: I was wondering when we might see the release of that Romulan Commander you announced way back in 2009? I saw a picture from the New York Toy Fair and man was I stoked. The likeness to the actor was fantastic. I’d love to see it make it into production, even if it were a limited run like the TOS wave 5 Romulan (which by the way would make a great 2 pack set, Hint Hint) or the TOS Alien Klingon Commander Kang. I’m also curious if you have given any thought to releasing an Andorian based on the TOS appearance? Since they were a founding member species in the federation and have made appearances in three television series (TOS, TNG, & ENT) as well as two films (The Motion Picture & Voyage Home), they have enough prominence for easy recognition. Just a thought. As a fan and collector, I hope your team will consider my questions for any future releases. Thank you for your time. – Michael DSTChuck: That line of action figures is now dormant and we have no plans to release them in that format at this time. For now we are focusing on the Select imprint for our Trek figures. Peter W. Will there be any more of the Star Trek Mego style retro figures? Will we ever see Vina as Orion Slave girl or Christine Chapel (as depicted on the Chris Pike card)? DSTChuck: I really can’t say – we’d like to do more and have talked about it, but the support was not there for the last few releases, so we’ll have to look at it every closely. As I said, though, we’d like to do something. Chris C. Hi guys, just wanted to thank you for replying to my last Ask, I do have a couple of other questions if you don’t mind answering them. Firstly, at the time of writing this, it would have been 50 years since Jeffrey Hunter and Leonard Nimoy started filming for the first pilot, and I was wondering if there could, or could possibly be, a Christopher Pike select figure on the horizon, or would he be a character too obscure to consider producing for the current line? I think he’d look great in his field costume and ‘laser’ in hand. Also, on a related note, is there a chance of re-releasing ‘The Cage’ version of the original Enterprise at some point? Secondly, in regards to the Marvel Select line, do you have plans for anymore figures from the X-men movie universe? It’s such a shame that Mystique never got to see the light of day, and my Wolverine figure is looking pretty lonely on his shelf! Thanks very much for taking the time to read this, I am massively looking forward to your ST:3 Phaser and Select Worf coming next year. DSTChuck: My pleasure, thanks for participating. I think Pike might be a long shot this early in the line, but the upcoming anniversary changes that a bit, so maybe… Right now I do not see us going back into the X-Men movie ‘verse, but never say never. Philip L. Are you guys gonna do the USS Enterprise NCC-1701-C? We have all the Enterprises except for C. Hell, even have Damaged Enterprise-B and two versions of the Excelsior both NCC and NX. When will we see the USS Enterprise NCC – 1701 – C from Yesterday’s Enterprise? We need it to complete the Enterprise Legacy. Really it’s high in demand right now for Trek collectors. DSTChuck: The C is one we’re considering based on the overall interest in the ship; we’d really like to get two ships a year out to collectors, so we’ll have to see. NOTE: Some questions that have been asked before have been cut. If you don’t see your topic discussed here, search past Ask DSTs! If you have a new question for DSTChuck, submit it via the drop-down form above, or send it to customerservice@diamondselecttoys.com, subject line “Ask DST”! 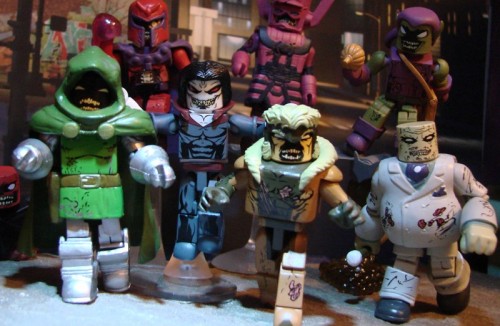