Diamond Select Toys has been cranking out piece after piece in their Batman Classic TV Series product line for over a year now, including resin busts, vinyl banks and metal bottle openers, and by now fans of the TV show should be cowl-deep in some of the greatest Batman collectibles ever made! We sat down with product designer (and lifelong Bat-fan) Barry Bradfield to talk about what went into the creation of some of these items, and to hear his own shocking origin story. Then head over to 13thDimension.com to read sculptor Jean St. Jean’s thoughts, followed by a bust-by-bust breakdown of the line with both artists. To the Bat-phone! DST: Barry, when did you first become a Batman fan? Barry Bradfield: I first became interested in Batman in 1992 when I was 11 years old, and my fandom grew from there. I’ve been a huge Batman fan since then, the TV series included. When did you first see the original TV Series? I remember the first time I saw the show very well. A Canadian kids channel brought the show back for reruns in 1993. The day that it first aired, I was on a school trip to learn about heraldry at the Governor General of Canada’s residence. (The Governor General being the representative of the Queen of England). While we toured the residence, I couldn’t focus on anything other than going home to watch Batman. 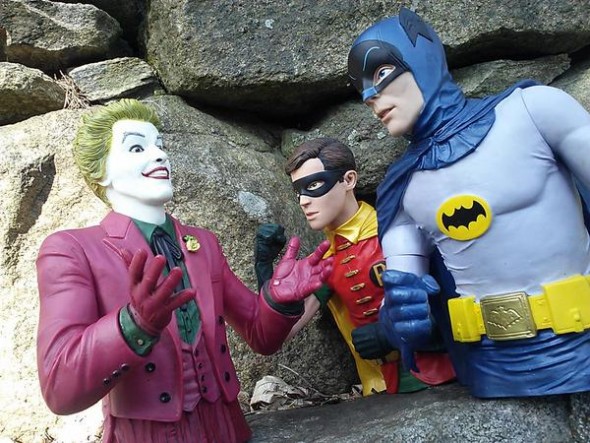 At one point, all of the schools visiting the residence were assembled to draw our own personal coat of arms consisting of things important to us. I was one of a few kids chosen to stand at the front of the room next to Governor General Ray Hnatyshyn to explain what we had drawn. I talked about how I drew my family, my house, and, naturally, Adam West as Batman! I said I added him because I thought he was really cool. The whole room erupted in laughter because everyone else had stuck to drawing their loved ones. That’s when Mr. Hnatyshyn put his hand on my shoulder and said in a genuine tone, “I think Batman’s really cool, too!” That lifted my spirits greatly, and it was all I could think about that night as I watched the first episode. 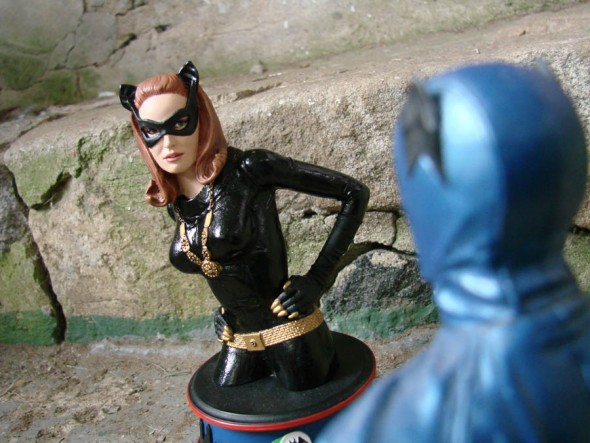 A decade later, Mr. Hnatyshyn passed away. I added this story to a news website that was collecting condolences and stories about him, thinking it would be sent on to his family. By surprise, my story actually ended up being told at his state funeral by Peter Mansbridge, a prominent Canadian news broadcaster. I can’t help but think back to this story any time I see that first episode of the series! 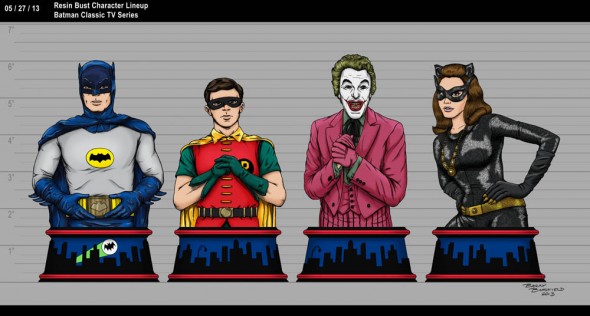 In designing the resin busts, were there any characters that you found it hard to decide on a pose for? The poses were actually really easy to come by, because the characters were all so richly portrayed by their actors on the show. We looked at a lot of key photography from the show and chose to work with classic poses that really showed the personalities of the characters. The hard part came in choosing the favourite pose for each character from so many possibilities. The initial challenge was making sure that the poses worked together. The challenge really solved itself though because the characters on the show already fit together so well. They made a completely believable universe, as crazy as it can be at times, because of how much the actors got into character. None of the characters feel out of place with each other, and I think that carries across in the busts as well. How did you come up with the concept for the base that is being applied across the line?  The base was actually the first thing that popped into my head when I heard we would be creating busts based on the show. I sketched it out immediately, and it really didn’t change from that concept. DST Product Manager Robert Yee and I tried some other directions, but we kept coming back to what is in the final product. The idea was to call back to some of the iconic imagery that appeared in each episode other than the characters themselves. One of those elements was the Batmobile. The black with red stripe brings up that image of the car without using any shapes directly from it. We thought that using specific elements of the Batmobile might be distracting on characters other than Batman and Robin. The other image I wanted to incorporate was the cartoon cityscape from the end credits. Framed by the black and red trim it looks really sharp. 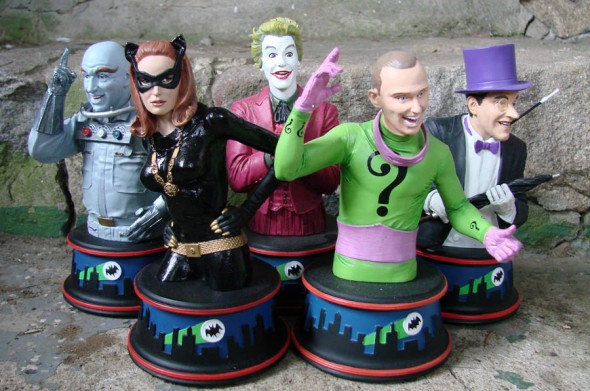 Do you have a favorite character you are/were looking forward to designing? I really do love all these characters so much, because I’ve been a fan for the better part of my life! It’s hard to choose, but I think I might’ve been looking forward to drawing the Riddler the most. He’s got so many great moods to choose poses from. I really enjoy when he’s explaining his plans and he’s so impressed with his own genius that he can barely contain his excitement. It’s when his voice slowly builds before he cracks up with laughter I love best, and the pose we chose reminded me of that. Sadly, he’s the character I probably spent the least amount of time designing, since his costume doesn’t have as much detail as the others. You also designed the vinyl bust banks. How did you try to make those different from the busts? If the resin busts represent the classic close-up character moments, then the first group of bust banks are from the action scenes. We wanted to make sure that each stood on their own, but if you put them together they form one of those dialogue moments before a fight would break out. For the first three, I pictured Batman sternly warning Joker of the error of his ways as Robin was itching to fight because Joker was egging them on.

With the bottle openers, what are the design challenges there? The challenge with any bottle opener is making sure that functional part doesn’t interfere with the overall design. There’s always an attempt to incorporate the opener hole into the design somehow, but sometimes it just doesn’t work if it’s going to obliterate too much detail that makes the object recognizable. 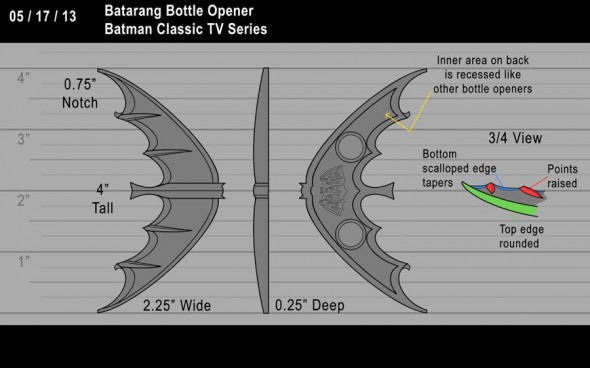 So far, they’re all a lot of fun — which is your favorite? Choosing a favourite is always hard because I really do love each one while I’m working on them, and more so when I finally get to hold the final version. If I had to pick one that stood out in my mind, though, it would be the Batmobile, mainly because it went through so many iterations. We originally tried to make 2.5-D front and top-down views of the car but neither were feeling right. The top view didn’t immediately read as being the Batmobile, and the front view didn’t have enough room to make it a functional bottle opener. 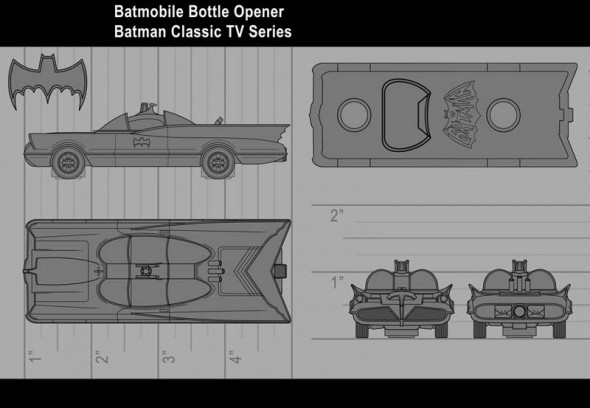 I kept thinking that a 3/4 view of the car was the most iconic, to really be able to quickly identify it, but I couldn’t make a convincing enough version that worked as a bottle opener. It just looked odd coming out of a scene in perspective when it was turned into that 2.5-D sculpt. Once, before starting another iteration, I threw out to Robert that it would be a lot easier just to make a fully realized Batmobile. We started to talk about that, and with some discussion about the feasibility of making one out of a single piece of metal, we were able to make it work. Plus, the fan in me just couldn’t wait to have the Batmobile attached via magnets to my fridge! 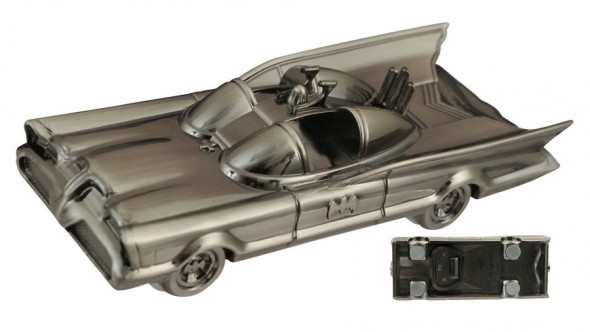 Check out an interview with Batman bust and bank sculptor Jean St. Jean over at 13th Dimension!