It’s October in New York City (and everywhere else), and New York Comic-Con will see the first public appearance of a whole slew of new products from Diamond Select Toys! Gotham, The X-Files, Back to the Future, Mass Effect, Batman: The Animated Series, Justice League, and of course Marvel will all have new items on display at NYCC 2015, plus more breaking items to be announced! All of the following items are available to pre-order through your local comic shop or favorite online retailer (or diamondselecttoys.com), with release dates in spring of 2016. Come by booth 1644 to see them in person! 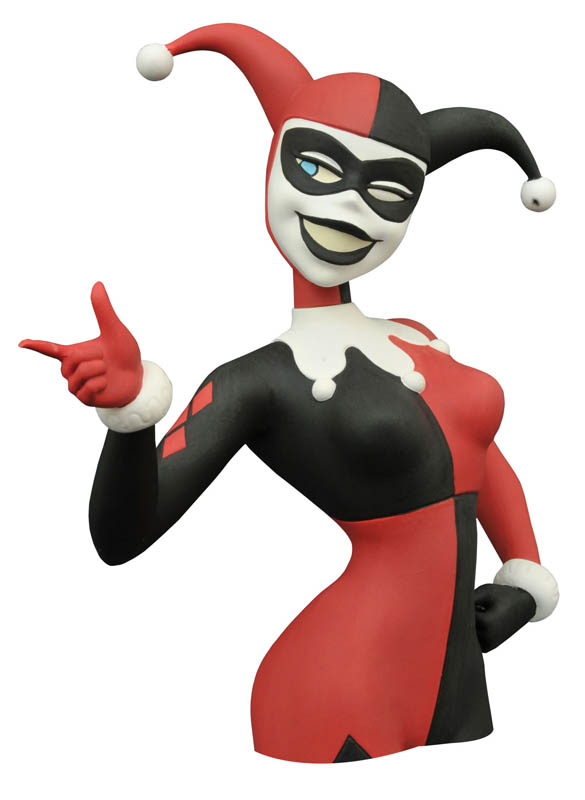 Batman The Animated Series Harley Quinn Vinyl Bust Bank A Diamond Select Toys release! A good partner-in-crime is worth her weight in gold! The Joker often fails to appreciate the value of his loving assistant Harley Quinn, but her value won’t be in question once you fill her with your spare change. With a coin slot in the back and an access door in the base, this approximately 8″ vinyl bank depicts Harley as she appeared on Batman: The Animated Series, and features collectible-quality sculpting and paint. Best of all, she’s in scale to the companion Joker bank, so you can pair them up for the crime of the century! Packaged in a clear polybag. Sculpted by Varner Studios. (Item #OCT152188, SRP: $22.99) 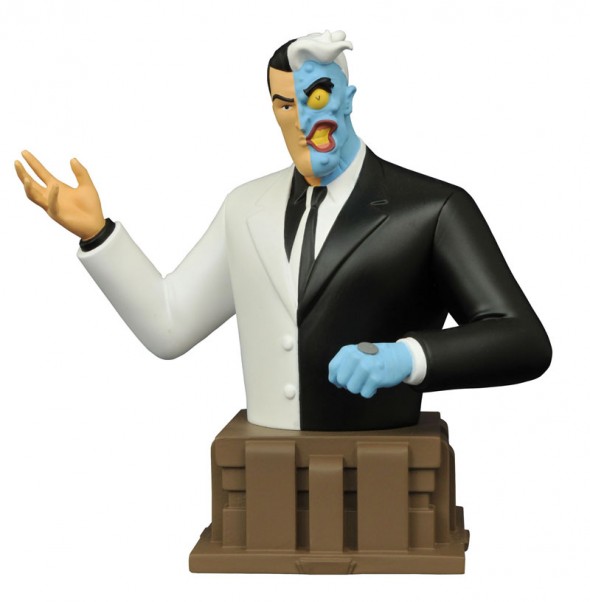 Batman The Animated Series Two-Face Resin Bust A Diamond Select Toys release! You won’t have to flip a coin to decide whether or not you need this bust! Joining DST’s line of resin busts based on Batman: The Animated Series, heavily scarred lawyer-turned-gangster Harvey Dent has been captured just as he appeared in the classic cartoon. Posed atop an art-deco base, this approximately 6″ resin sculpture of Two-Face comes with a certificate of authenticity, inside a full color box. Limited to 3,000 pieces! Sculpted by Varner Studios. (Item #OCT152189, SRP: $59.99) 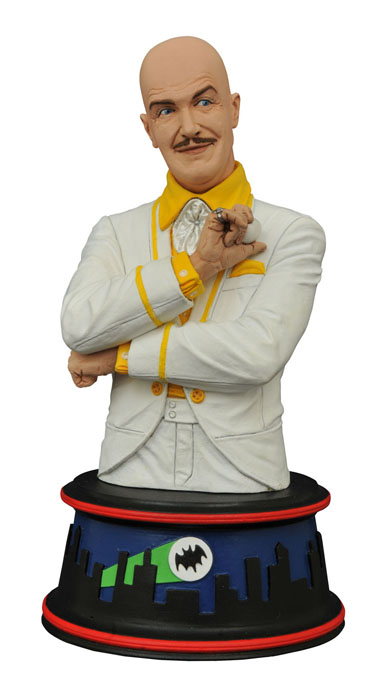 Batman Classic TV Series Egghead Resin Bust A Diamond Select Toys release! An egg-cellent addition to any Batman collection! One of Batman’s most brilliant foes on the Batman Classic TV Series was none other than Egghead! With a egg-shaped head full of knowledge, the criminal mastermind had an unnatural obsession with eggs, an weakness often egg-sploited by the Caped Crusader. This approximately 6″ resin bust features the likeness of actor Vincent Price and sits atop a base inspired by the show’s animated opening. Packaged with a certificate of authenticity in a full-color box. Designed by Barry Bradfield! Sculpted by Jean St. Jean! Limited to egg-zactly 3,000 pieces! (Item #OCT152199, SRP: $59.99) 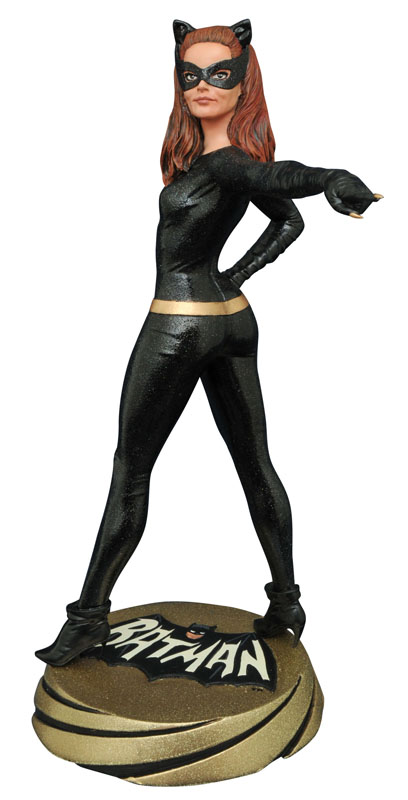 Batman Classic TV Premier Collection Catwoman Resin Statue A Diamond Select Toys release! When the bat’s away, the cat will play! Continuing DST’s Premier Collection, this resin statue captures Catwoman, from the Batman Classic TV Series, in all of her seductively dominating majesty! Wearing her famous black catsuit, Catwoman (as played by Julie Newmar) points imperiously at an underling, perhaps ordering him to deal harshly with intruders! Measuring approximately 12″ tall on her pedestal base, this statue is limited to just 1,966 pieces, and comes packaged with a certificate of authenticity in a full-color box. Sculpted by Clayburn Moore! (Item #OCT152200, SRP: $150.00)

Back to the Future 30th Anniversary Minimates 1985 Box Set A Diamond Select Toys release! What are you looking at, butthead? It’s an all-new box set of Back to the Future Minimates! DST returns to Hill Valley with four brand-new Minimates mini-figures, all from the year 1985 — Waking Up Marty McFly, Author George McFly, Car Wash Biff Tannen, and the never-before-made Needles! Only a chicken wouldn’t want this set! Each 2-inch Minimates mini-figure features 14 points of articulation and fully interchangeable parts and accessories. Packaged on a full-color blister card. (Item #OCT152184, SRP: $24.99) 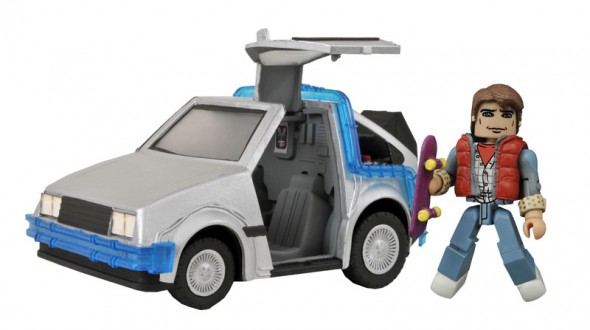 Back to the Future 30th Anniversary Time Machine Minimates Vehicle A Diamond Select Toys release! It’s back, and just in time! One of our most popular Minimates vehicles returns, in an all-new edition for 2015! The 1985 version of the Time Machine features opening gull-wing doors and rolling wheels, and comes with an all-new 2-inch Minimates mini-figure of Marty McFly who can fit inside! Measuring approximately 5 inches long, the Time Machine comes packaged on a full-color blister card, and can hold up to two Minimates. Designed by Art Asylum! (Item # OCT152183, SRP: $19.99) 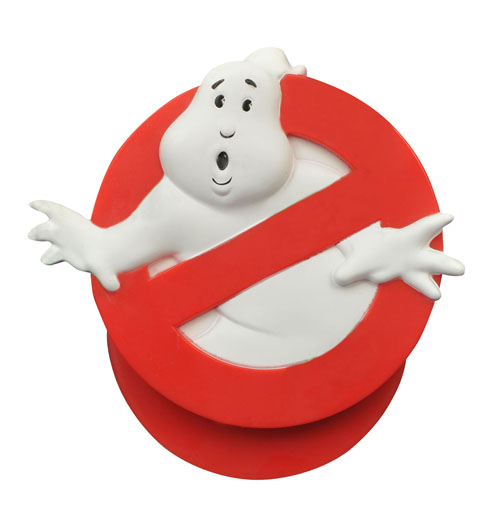 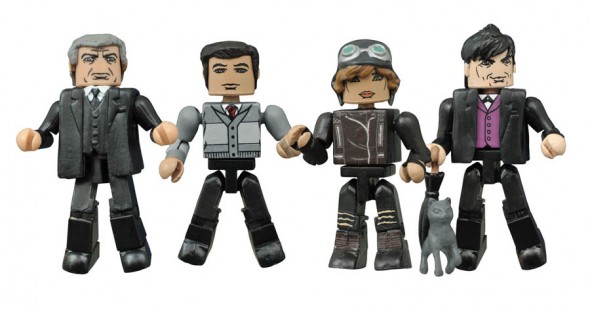 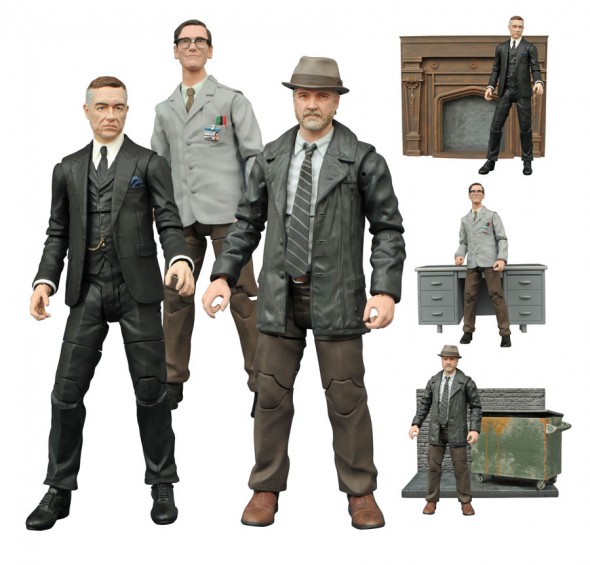 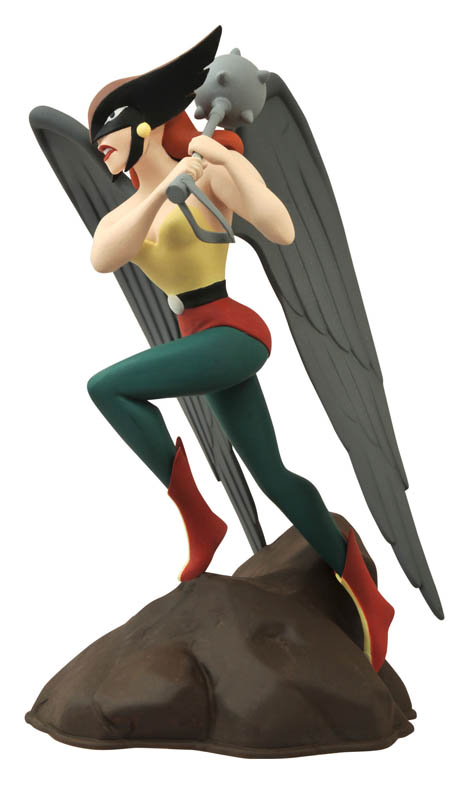 Justice League Animated Femme Fatales Hawkgirl PVC Statue A Diamond Select Toys release! Build your own league of heroines! The line of DC Animated PVC statues continues with this sculpture of Hawkgirl in action! Depicting the winged Thanagarian warrior as she appeared on Justice League, this approximately 9″ scale plastic statue has Shayera Hol brandishing her mace in combat. Packaged in a full-color window box, Hawkgirl is in scale to other Femme Fatales statues, including Wonder Woman, Batgirl and Supergirl! Sculpted by Varner Studios. (Item #OCT152190, SRP: $45.00) 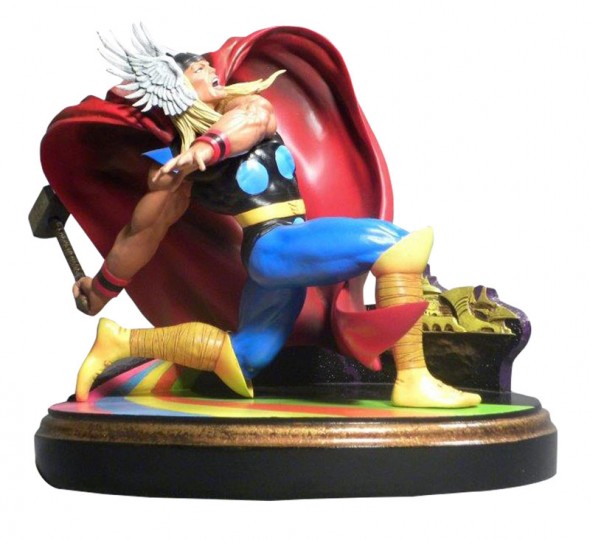 Marvel Premier Collection Thor Resin Statue A Diamond Select Toys release! Thou shalt not pass… without checking out this statue! The second full-size resin statue in the all-new Marvel Premier Collection is none other than Thor, God of Thunder! Based on a famous 1969 cover image, Thor wears his timeless classic outfit and swings his hammer as if preparing to hurl it skyward. Crouching on a circular base designed to represent Bifrost, the rainbow bridge of Asgard, this approximately 9″ statue of Thor is limited to only 3,000 pieces, and comes packaged with a certficate of authenticity in a full-color box. Sculpted by Clayburn Moore! (Item #OCT152201, SRP: $150.00) 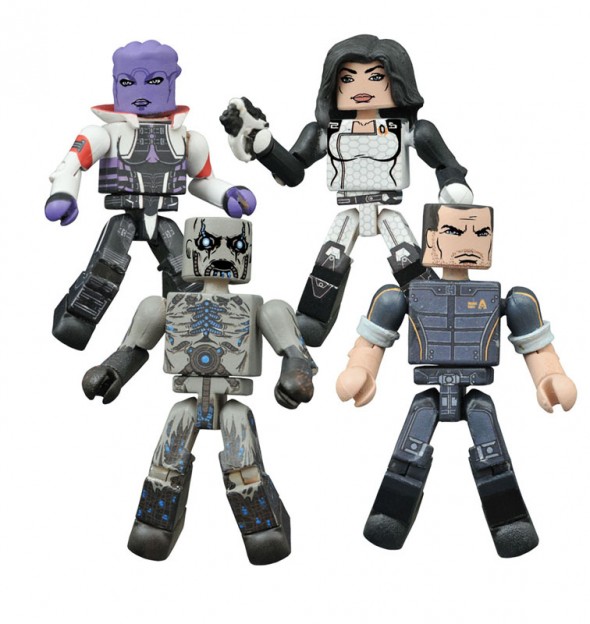 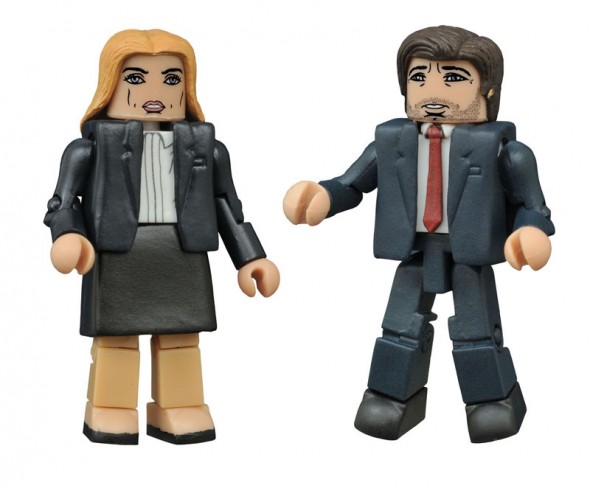 X-Files Minimates Modern Mulder & Scully 2-Pack A Diamond Select Toys release! Mulder and Scully are returning to TV in an all-new mini-series, and this Minimates 2-pack captures the pair in their all-new looks! These Minimates mini-figures of FBI agents Fox Mulder and Dana Scully are based on their 2016 reunion show, and depict Mulder in his unshaven appearance, and Scully with her blonde hairstyle. Each mini-figure measures approximately 2 inches tall, with 14 points of articulation, and like all Minimates, their parts and accessories are fully interchangeable. Set includes weapons, badge hand and display bases, packaged in a full-color blister card. Designed by Art Asylum. (Item #OCT152185, SRP: $9.99) 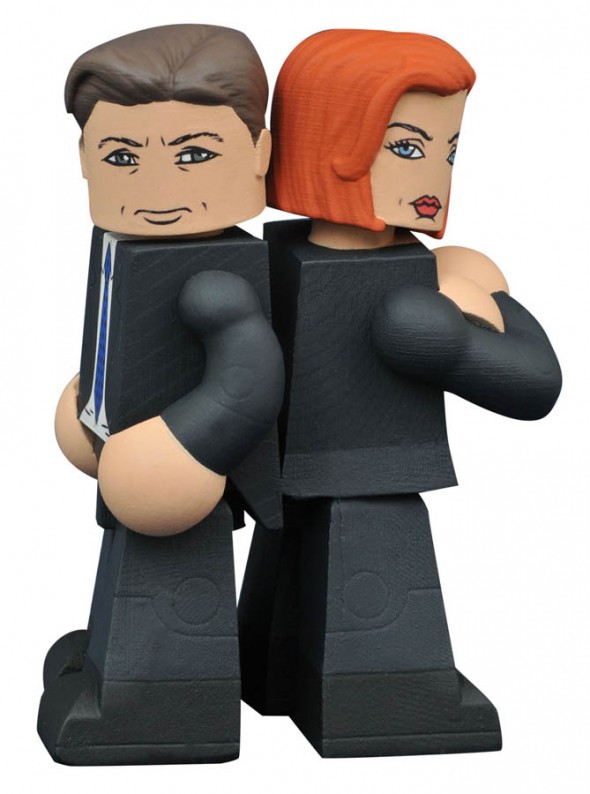 X-Files Vinimates Classic Mulder & Scully Vinyl Figures A Diamond Select Toys release! The truth is out there, and the truth is that The X-Files rules! Celebrate 23 years of The X-Files with these two classically-styled Vinimates vinyl figures. Designed in the Minimates block-figure style, these 4-inch static figures depict Agents Mulder and Scully in their original-series appearances, with their arms crossed, as if daring the world to give them a mystery they can’t solve. Each figure features a ball-jointed neck, and comes packaged in a full-color window box. Designed by Art Asylum! Mulder Vinimate (Item #OCT152186, SRP: $9.99) Scully Vinimate (Item #OCT152187, SRP: $9.99) OFFERED AGAIN: 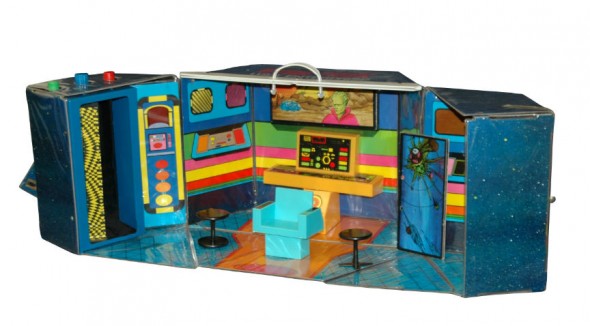 Star Trek TOS Retro Bridge Playset A Diamond Select Toys release! Return to the days of Captain Kirk and the original U.S.S. Enterprise with this retro-scaled recreation of the classic Mego Enterprise Bridge Playset! Maintaining all the features of the original release, this playset will make your 8-inch retro cloth figures explore the galaxy with interchangeable view screens, or vanish with the turn of a transporter dial! Featuring a classic fold-up design, this playset becomes a carrying case, allowing you to boldly go where no starship has gone before! Playset features vinyl and cardboard construction, and comes packaged in a full-color, retro-style box. Lovingly re-created by DST! (Item #SEP084795, SRP: $60.00) Find your nearest comic shop at comicshoplocator.com! 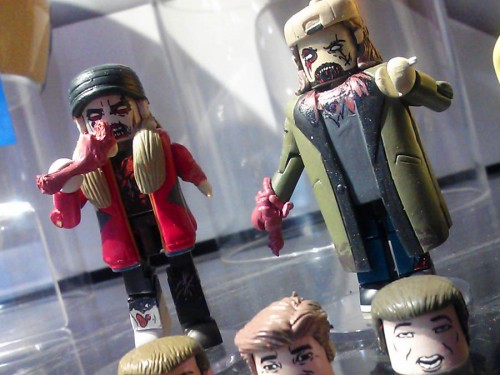 Next Up: On Sale This Week: Gotham, Godzilla, The Walking Dead and More!