It’s Back to the Future Day at your local comic shop, and in addition to all of the great Diamond Select Toys products already on sale there — including BTTF electronic time machines, Marty hats and OUTATIME license plates – DST is sending over even more cool stuff, because it’s also New Toy Day! Today finds new arrivals racing in from the past (Nightmare Before Christmas Select Action Figures), the present (Ant-Man Movie Minimates Box Set) and the future (Star Trek TNG Worf Bank). So read on for details, then get in your DeLorean and race over to your local comic shop! 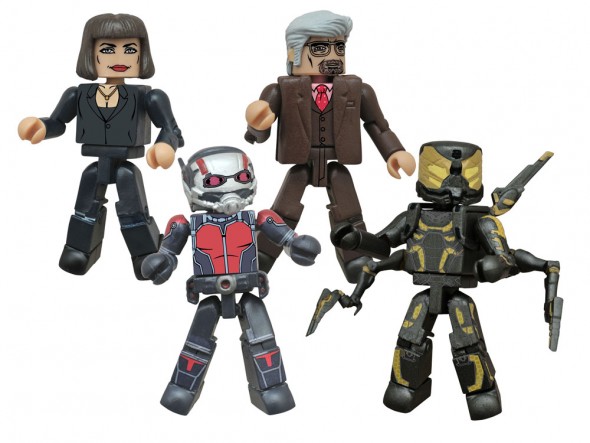 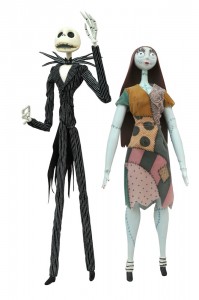 Nightmare Before Christmas Jack and Sally 16″ Coffin Doll Set A Diamond Select Toys release! What’s this? What’s this? After a long absence, the stars of the stop-motion animation holiday classic Tim Burton’s The Nightmare Before Christmas are back, just how you remember them! Re-creating the classic collectable figures of yesteryear, these 16-inch poseable figures of Jack Skellingon and his true love Sally feature real cloth costumes over articulated bodies, and come packaged in a coffin-shaped window box. Limited to 1,000 numbered pieces. Originally designed and created in Japan. (Item #FEB152151, SRP: $99.99)

Nightmare Before Christmas Select Action Figures Series 1 Asst. A Diamond Select Toys release! Tim Burton’s The Nightmare Before Christmas is finally getting the Select action figure treatment! The Select line is known for its detailed sculpts, larger scale and its diorama bases, and NBX promises to put all of those features to the test! Jack Skellington, Sally and Oogie Boogie will make up the first series of figures, each sculpted to a 7-inch scale with character-appropriate articulation. Jack Skellington will come with a cemetery environment, Sally with a Halloweentown environment and alternate kneeling legs, and Oogie will come with a stone floor base and a removable face! Each figure will come packaged in the Select-style display packaging, with spine artwork. Sculpted by Dave Cortes! (Item #APR152296, SRP: $149.94/case) Jack Skellington Figure (Item #APR152293, SRP: $24.99) Sally Figure (Item #APR152294, SRP: $24.99) Oogie Boogie Figure (Item #APR152295, SRP: $24.99) 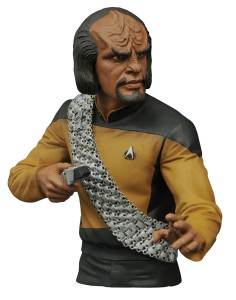 Star Trek TNG Lt. Worf Vinyl Bust Bank A Diamond Select Toys release! Where’s the safest place on the Enterprise? Right behind Worf! Make your money that safe by putting it inside this 7” vinyl bust bank depicting Star Trek’s most famous Klingon crew member, with his phaser at the ready. With detailed, bust-quality paint applications and a coin slot on his back, this functional collectible is torn between two cultures – does he belong to both, or neither? You decide! Comes packaged in a clear polybag. Sculpted by Patrick Pigott! (Item #MAY152170, SRP: $22.99) Find your nearest comic shop at ComicShopLocator.com!