Halloween may be over, but the terror is just beginning, as Diamond Select Toys unleashes a legion of fairly frightening fellows on comic shops across North America! The Dark Knight of Batman: The Animated Series. The Yautja hunter from the Predator films. Rick Grimes himself of The Walking Dead fame. All three are here to capture their prey and chew bubblegum, and they just threw their bubblegum off the side of a building. Read on for a full lineup of DST products shipping this week — including an impressive array of bottle openers — and reserve your faves at your local comic shop!

Back to the Future Time Machine Metal Bottle Opener Remember that time you wanted a refreshing drink, but didn’t have a bottle opener? Well, now you can plan for the future with this sculpted 4” metal bottle opener depicting the famous time machine from Back to the Future! It won’t travel back in time to open past drinks for you, but the magnets on the wheels will keep it mounted on your refrigerator so it will always be there, time after time. Comes packaged in a full-color slip case. (Item #JUN152100, SRP: $18.00) 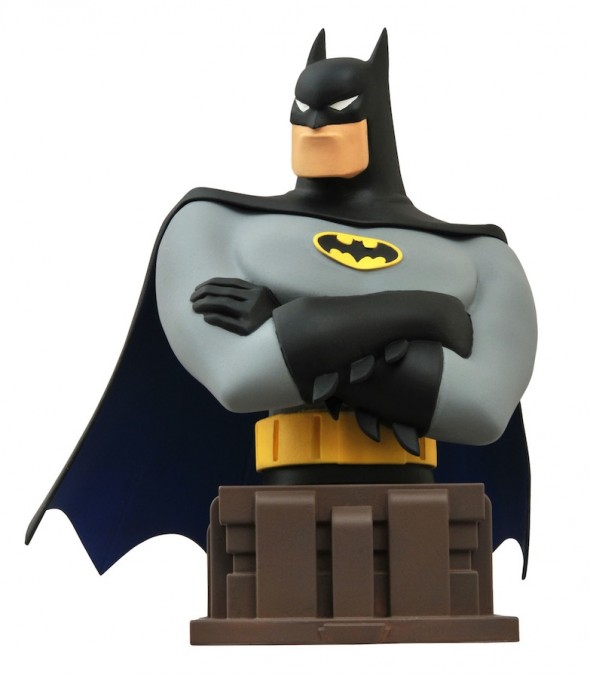 Batman The Animated Series Batman Resin Bust Evildoers beware – Batman is kicking off the next big bust line from Diamond Select! Based on the iconic and revolutionary Batman: The Animated Series, this line of 6-inch resin busts will depict Batman and his friends and foes just as you remember them from the cartoons! The Caped Crusader himself will be the first release in the series, with his arms crossed atop an art-deco base inspired by the show’s distinctive style. Packaged in a full-color box with a certificate of authenticity. Limited to 3,000 pieces. Sculpted by Steve Varner Studios! (Item #APR152298, SRP: $59.99) 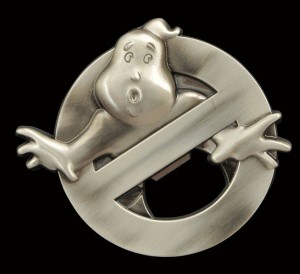 Ghostbusters Logo Metal Bottle Opener You have the tools, you have the talent… but do you have a bottle opener? When you’ve defeated an invasive supernatural entity, and it’s time to celebrate with a cool beverage, be sure you have this 3” metal bottle opener handy. Scultped in the shape of the Ghostbusters logo, this opener has magnets on the back so it will stick to your refrigerator, containment grid or the hood of the Ecto-1. Packaged in a full-color slipcase. (Item #MAY152169, SRP: $18.00) 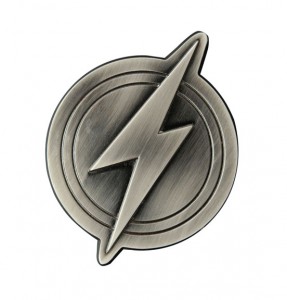 Justice League Flash Logo Metal Bottle Opener When you need a bottle opener, there’s no time to dilly-dally. Show your friends how fast you are at fulfilling your hosting duties with this metal bottle opener in the shape of the Flash’s logo from Justice League! Cast in solid metal and measuring approximately 4 inches long, this opener also has magnets on the back, so you can stick it to your refrigerator or global threat monitoring station for a more rapid response time. Thirst never waits! Packaged in a full-color slipcase. (Item #JUL152192, SRP: $18.00)

Nightmare Before Christmas Jack Skellington 16″ Coffin Doll Halloween is coming, and so is Jack Skellington! The star of Tim Burton’s stop-motion masterpiece, The Nightmare Before Christmas, this 16-inch tall doll of Jack is a must for any home that embraces the spirit of Halloween. With a fully articulated body and a real cloth costume, this exacting re-creation of the classic Jack figure will rest comfortably in his coffin-shaped window box until the times comes for him to rise once again! Limited to 1994 pieces! (Item #APR152291, SRP: $49.99) 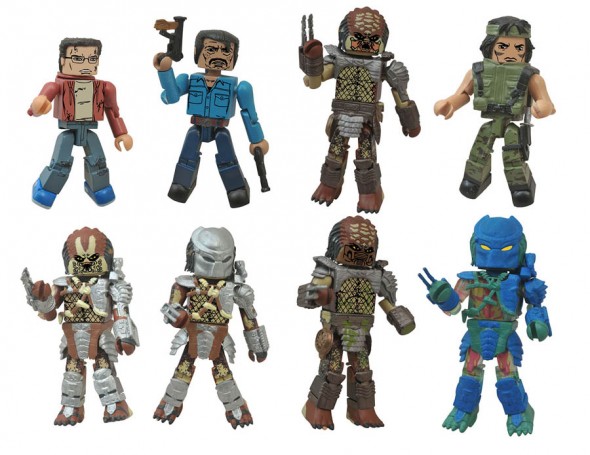 Predator Minimates Foil Bag Counter Display Asst. Get to the chopper! It’s a whole new line of Minimates mini-figures, based on the cinematic world of Predator! This first blind-bagged assortment features Billy and the Jungle Predator (masked, unmasked and thermal) from the first film, the City Predator (regular and battle-damaged) from Predator 2, and Edwin and Cuchillo from Predators! There are eight different figures in all, with a full set in every display case of 18 foil bags, but Edwin is the rarest figure, with only one per case! Let the hunt begin! Each 2-inch Minimates mini-figure features 14 points of articulation as well as interchangeable parts and accessories. Designed by Art Asylum! (Item #MAY152178, SRP: $5.99/ea.) 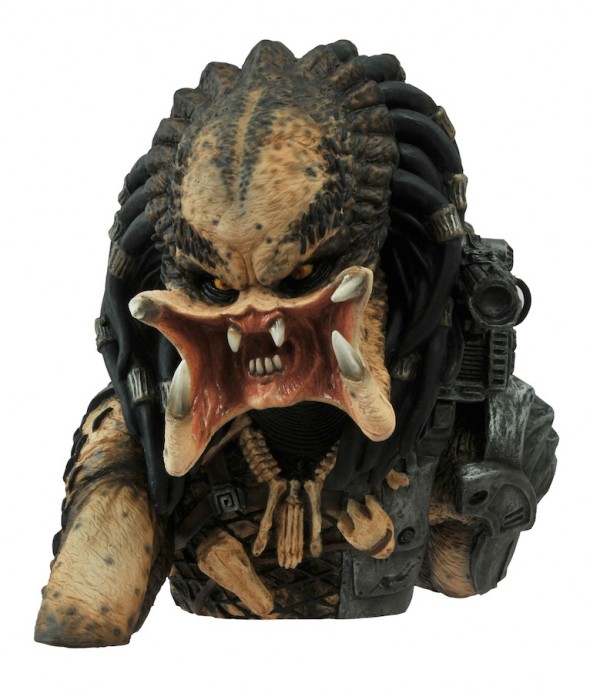 Predator Unmasked Vinyl Bust Bank DST goes deeper into the jungle with this vinyl bust bank of an unmasked Predator! With his mandibles out and his shoulder cannon at the ready, this hunter is protective of his prize, and his prize is your loose change! Insert coins through a slot in the back and remove them through an access door in the base. With a detailed, collectible-quality sculpt by Eli Livingston, you’ll take one look at this bank and you’ll say, “You are one ugly money-saver!” Packaged in a clear polybag. (Item #APR152309, SRP: $22.99) 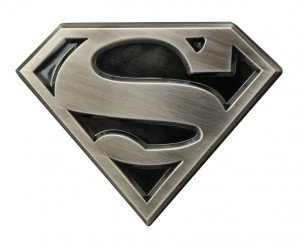 Superman Animated Logo Metal Bottle Opener Faster than a speeding bullet! More powerful than a locomotive! Able to remove a bottlecap in a single bound! Draw on the strength of the Man of Steel with this solid metal bottle opener in the shape of the Superman logo from Superman: The Animated Series. Like Superman himself, this 4” opener can bend metal and remove bottlecaps with ease, and two magnets on the back allow it to hover on your refrigerator until it’s time to swoop in and save the day! Packaged in a full-color slipcase. (Item #JUN152098, SRP: $18.00) 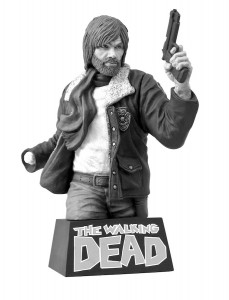 Walking Dead Rick Grimes B&W Vinyl Bust Bank A Diamond Select Toys release! Keep your money safe from zombies (and the living) with the unyielding glare of Rick Grimes! Based on Robert Kirkman’s award-winning comic book, this 7-inch vinyl bust bank of Rick Grimes has been rendered in black-and-white, just as he appears in the pages of the comic! With a coin slot in the back and an access door in the base, he’s a bank as well as a collectible-quality bust! Packaged in a clear polybag. (Item #MAY138201, SRP: $22.99) Reserve yours at your local comic shop, order from your favorite online retailer, or visit diamondselecttoys.com! 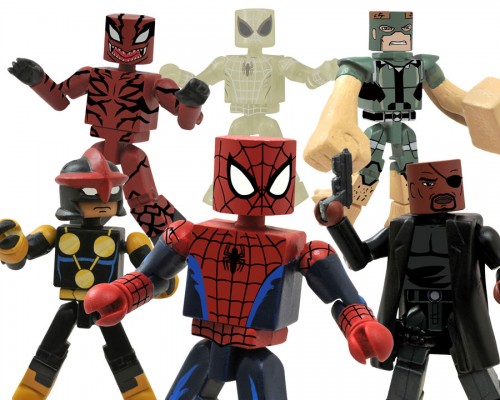 Next Up: Marvel Minimates Series 20 Makes a Splash at Toys“R”Us!