The Marvel Shop has teamed up with Diamond Select Toys for many past exclusive Marvel Select figures, but this is the one everyone has been waiting for! Starting January 12, Marvel Shop customers can pre-order a new, exclusive 7-inch action figure of the Spectacular Spider-Man, in his classic comic-book costume, with multiple interchangeable parts! Arguably the Marvel Universe’s most famous citizen, Spider-Man is a perennial favorite for toy collectors, with everyone seeking out the perfect Spider-Man figure for their toy display. This all-new Marvel Select figure of the wall-crawler wears his world-famous red-and-blue tights, stands exactly 7 inches tall and features 16 points of articulation, allowing him to strike a variety of crouching, web-shooting and web-swinging poses. And did we mention interchangeable parts? In addition to his basic pair of open hands, Spider-Man comes with three bonus sets – fists, grabbing hands and web-shooting hands. He also comes with an interchangeable Peter Parker head, a camera accessory that hangs on his shoulder, and a bunched-up Spider-Man mask that he can hold in his grabbing hand! All of this comes packaged in slimmed-down, display-ready Marvel Select packaging, with side-panel artwork for shelf reference. Pre-orders will open on January 12, 2016, exclusively at marvelshop.com, and then further pre-orders will open on February 1 at disneystore.com and disneystore.eu. The figures will ship to customers and to Disney Store locations on or before February 29, 2016. The Spectacular Spider-Man joins the roster of exclusive Marvel Select figures at the Marvel Shop, including Captain America, Hulkbuster Iron Man, Unleashed Hulk, Bleeding Edge Iron Man., Mighty Thor, Avenging Hawkeye and Unmasked Ant-Man. And stay tuned for even more exclusive Marvel Select news! 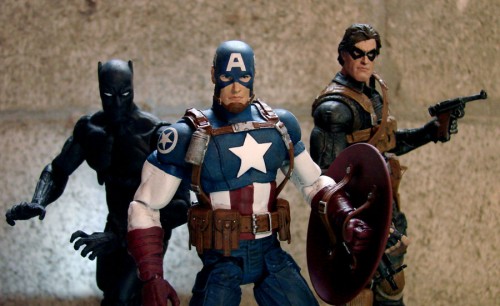 Next Up: Exclusive Avengers Figures Bring the Battle to Marvel Shop an...