It’s the end of a crazy week, but while we’ve all been ogling upcoming toys at Toy Fair, new toys have been arriving at comic shops and specialty stores across America! Not only have the first-ever Vinimates vinyl figures based on The X-Files hit stores, but the second series of Gotham Select action figures is out, plus the next vinyl bank based on Batman: The Animated Series! Read on for details, then find your nearest comic shop at comicshoplocator.com! X-Files Vinimates Classic Mulder & Scully Vinyl Figures A Diamond Select Toys release! The truth is out there, and the truth is that The X-Files rules! Celebrate 23 years of The X-Files with these two classically-styled Vinimates vinyl figures. Designed in the Minimates block-figure style, these 4-inch static figures depict Agents Mulder and Scully in their original-series appearances, with hands on hips and arms crossed, as if daring the world to give them a mystery they can’t solve. Each figure features a ball-jointed neck, and comes packaged in a full-color window box. ORDER: X-Files Vinimates Classic Mulder Vinyl Figure (Item #OCT152186, SRP: $9.99) ORDER: X-Files Vinimates Classic Scully Vinyl Figure (Item #OCT152187, SRP: $9.99) 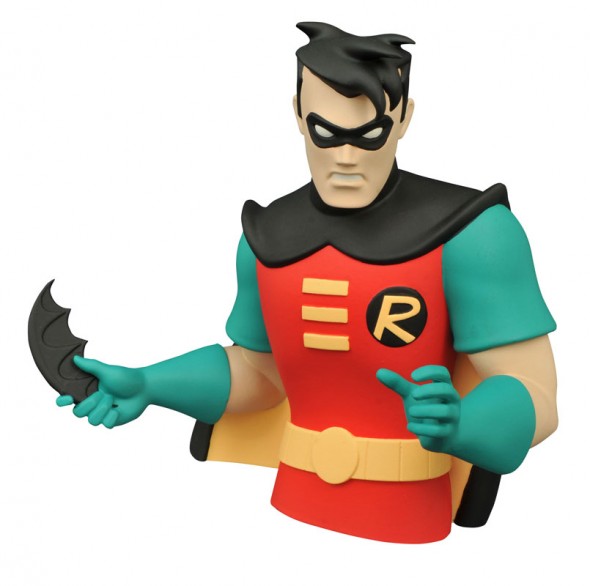 Batman The Animated Series Robin Vinyl Bust Bank A Diamond Select Toys release! Even Batman needs a wingman sometimes! There’s nothing more annoying than fighting crime with a pocketful of loose change, so why not give it to your sidekick to hold? This vinyl bust bank of Robin is based on his appearance in Batman: The Animated Series, and features cartoon-accurate details, as well as a coin slot in the back and an access door in the base. Once secured inside the Boy Wonder, your money will be as safe as your secret identity! Packaged in a clear polybag. Batman bank coming soon! Sculpted by Varner Studios! (Item #SEP152163, SRP: $22.99) ORDER: Batman The Animated Series Robin Vinyl Bust Bank (Item #SEP152163, SRP: $22.99) Gotham TV Select Action Figures Series 2 Asst. A Diamond Select Toys release! The world of Gotham is growing, with three new Select-style action figures based on the hit TV series! Each 7-inch action figure includes a diorama piece, and some include character-appropriate accessories. From Wayne Manor, Alfred Pennyworth comes with the mansion’s fireplace mantel. In the GCPD precinct, forensic investigator Edward Nygma comes with a mug and desk. On the streets of Gotham, Detective Harvey Bullock comes with his hat, gun and a section of alleyway — connect it to Jim Gordon’s alley to expand the crime scene! Each figure and diorama comes packaged in display-ready Select packaging, with spine artwork. Sculpted by Gentle Giant Studios. ORDER: Gotham TV Select Series 2 Alfred Pennyworth Action Figure (Item #OCT152193, SRP: $24.99) ORDER: Gotham TV Select Series 2 Edward Nygma Action Figure (Item #OCT152195, SRP: $24.99) ORDER: Gotham TV Select Series 2 Harvey Bullock Action Figure (Item #OCT152194, SRP: $24.99) – IN STORES 2/24 Find your nearest comic shop at comicshoplocator.com or order online at diamondselecttoys.com!