It’s another New Toy Day at comic shops, which means it’s time for another delivery from Diamond Select Toys! With seven new items hitting comic shops this week, DST is offering the best of all worlds once again, including products based on Gotham, Aliens, Mass Effect, Back to the Future, Batman: The Animated Series, the Batman Classic TV Series and Marvel Comics! Read on for details, then call your local comic shop and reserve your items today! 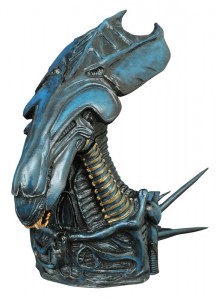 Aliens Xenomorph Queen Vinyl Bust Bank Talk about protection! Your spare change is safe and sound under the watchful eye of this all-new Xenomorph queen Vinyl Bust Bank. Based on the matriarch’s appearance in Aliens, this beautifully rendered bank features a detailed sculpt by Jean St. Jean and a collectible-quality paint application, and stands alongside some of the finest Alien collectibles. But she also has a coin slot in back and an access door in the base, so she’ll guard your quarters like they were her own children! If you were going to put all your eggs in one basket, this is it! Comes packaged in a clear polybag with dorsal spines. (Item #SEP152158, SRP: $29.99) Back to the Future 30th Anniversary Minimates 1885 Box Set It’s time to go back in time… again! The newest 30th Anniversary Minimates box set based on the Back to the Future trilogy takes you all the way back to 1885! Four new Minimates, including Celebration Marty with his pistol and pie plate, Festival Doc Brown with the framed photo, and two never-before made characters – Clara with her telescope and Seamus McFly with Marty’s gun and belt! Each 2-inch Minimates mini-figure features 14 points of articulation and fully interchangeable parts. Set comes packaged on a full-color blister card. (Item #DEC152115, SRP: $24.99) Batman Classic TV Series Egghead Resin Bust An egg-cellent addition to any Batman collection! One of Batman’s most brilliant foes on the Batman Classic TV Series was none other than Egghead! With a egg-shaped head full of knowledge, the criminal mastermind had an unnatural obsession with eggs, an weakness often egg-sploited by the Caped Crusader. This approximately 6″ resin bust features the likeness of actor Vincent Price and sits atop a base inspired by the show’s animated opening. Packaged with a certificate of authenticity in a full-color box. Designed by Barry Bradfield! Sculpted by Jean St. Jean! Limited to egg-zactly 3,000 pieces! (Item #OCT152199, SRP: $59.99) Batman The Animated Series Two-Face Resin Bust You won’t have to flip a coin to decide whether or not you need this bust! Joining DST’s line of resin busts based on Batman: The Animated Series, heavily scarred lawyer-turned-gangster Harvey Dent has been captured just as he appeared in the classic cartoon. Posed atop an art-deco base, this approximately 6″ resin sculpture of Two-Face comes with a certificate of authenticity, inside a full color box. Limited to 3,000 pieces! Sculpted by Varner Studios. (Item #OCT152189, SRP: $59.99) Gotham TV Minimates Series 2 Box Set The Minimates gang is making a power play! In the second box set of Minimates mini-figures based on the Gotham TV show, four all-new Minimates mini-figures are added to the growing Gotham collection! Bruce Wayne, Selina Kyle, Alfred and Oswald “The Penguin” Cobblepot come packaged in a full-color blister card. Each 2-inch Minimates mini-figure features 10-14 points of articulation, as well as fully interchangeable parts and accessories, like Selina’s cat! Designed by Art Asylum! (Item #OCT152196, SRP: $24.99) Marvel Premier Collection Wolverine Resin Statue He’s the best there is at what he does, and what he does isn’t pretty… except when it really is! The first statue in DST’s revived Marvel Premier Collection series is none other than Wolverine, captured unmasked and mid-stride in a snowy landscape. Meticulously sculpted by Clayburn Moore, this diorama piece depicts the X-Man and Avenger in his brown costume and leather jacket, standing approximately 9 inches tall, on a base that measures 10 inches by 15 inches. Limited to only 3,000 pieces, this statue comes packaged with a certificate of authenticity in a full-color box. (Item #AUG152317, SRP: $199.99) Mass Effect Minimates Series 1 Box Set Mass Effect Minimates are now in effect! This all-new four-pack of characters from the popular Mass Effect video game trilogy infludes Commander Shepard (with John and Jane heads), Cerberus officer Miranda Lawson, “Pirate Queen” Aria T’Loak and a zombified human Husk. Each 2-inch Minimates mini-figure features 14 points of articulation, as well as fully interchangeable parts and accessories. Packaged in a full-color blister card. Designed by Art Asylum. (Item # OCT152203 , SRP: $24.99) Find your local comic shop at comicshoplocator.com!