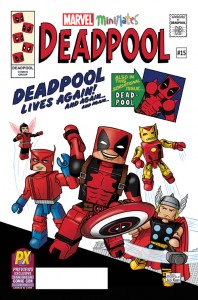 SDCC 2016 DEADPOOL #15 MINIMATES VARIANT A Civil War II Tie-In! The Mercs for Money hate Deadpool and want out! Wait… isn’t there a new Mercs for Money series launching? How is that going to work? This issue features a new Minimates-style cover that has Deadpool joining the original Avengers line-up. Parental Advisory. (W) Gerry Duggan (A) Mike Hawthorne (CA) Barry Bradfield $5, Limited to 7,500 copies. Stay tuned for announcements about DST panels and events at Comic-Con!