It’s a new Ask DST with Diamond Select Toys president DSTChuck, and this week it’s all about Marvel, specifically Marvel Select action figures! One of our most popular lines, the MS line has been going strong since 2002, and if there’s three things the fans want, it’s more, more, more! DSTChuck took a break from line-planning and sculpt-approving to answer some questions about logistics, line-ups and licensing. Read on, then submit your own question in the drop-down form above or via e-mail! Rodney H. Hey DST Chuck!!! I was wondering if you could answer these questions. By the way great looking figures with the civil war marvel select figures. 1. How are certain characters picked to be made into figures? I know that the big hitters like Captain America,Ironman and spiderman are always the obvious choices, especial if they appear in movies. However the last couple of marvel movies introduced new characters that would have mad awesome selects, yet they were passed over. From Vision, Scarlet Witch, Quick Silver, Cross Bones GOG figures as well? Thanks for taking the time to answer my questions, keep up the great work. DSTChuck: Happy to, Rodney. The problem with the Select line is we only make a limited number of releases per year. With three Marvel movies each year plus all the past and current editorial there really is no way to come close to doing all we want to do. So we try to find a decent mix between the heavy hitters as well as characters fans would love to have. Michael H. Hey Chuck! :) 2 things: First – You guys hook me on collecting Marvel select but sometimes you have the oddest selections. No Ultron or Vision for Avengers Age of Ultron? I get your picks for Civil War, although I really wanted a second chance at Vision – I can see Cap, Buck, and Stark being your focus. But please, Please, PLEASE for the love of all that is good and wholesome in the MCU give me a Groot and rocket! Would you say it’s hypothetically possible I wouldn’t be disappointed with your GOTG2 offering next year? 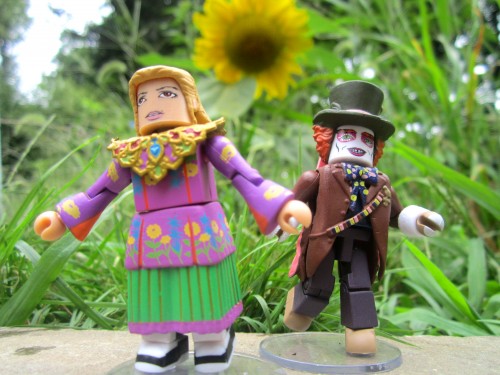 Next Up: In Stores This Week: Alice & NBX Minimates, Joker & Superma...