After a summer of spectacle, everyone is still talking about Marvel’s Captain America: Civil War, which holds onto its high rank as the year’s most exciting film! Now, as fans look forward to the release of the film on DVD and Blu-Ray, they can pre-order a new Marvel Select Captain America variant action figure based on the film, exclusively through Marvel Shop and the Disney Store! 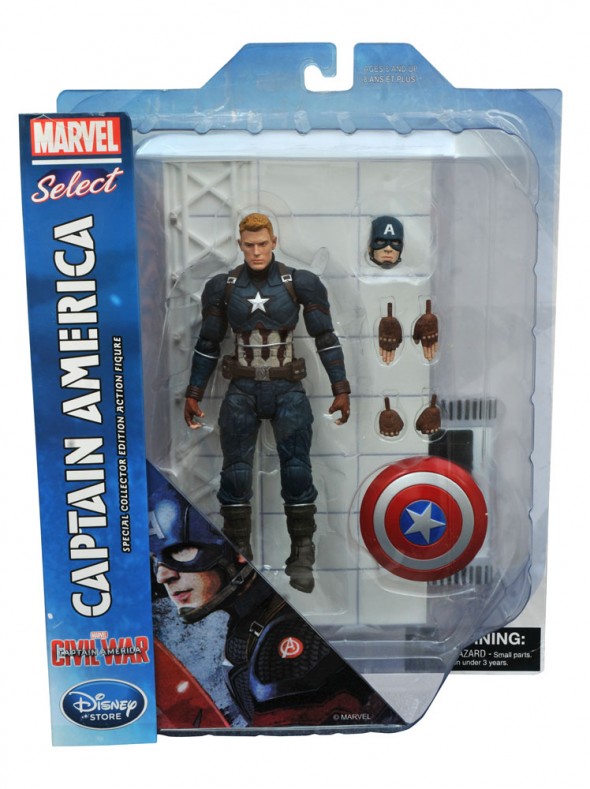 Created by Diamond Select Toys, this exclusive variant figure of Captain America stands approximately 7.25 inches tall with 16 points of articulation, allowing him to strike a wide variety of battle-ready poses. Accessories include his trademark shield, two alternate fists, two alternate saluting hands and an exclusive interchangeable unmasked head! Also included is a 9-inch tall, 5-inch wide diorama piece re-creating the exterior of the Avengers headquarters – buy multiple figures to extend the background, or connect it to other diorama pieces included with other Marvel Select Civil War action figures. Pre-orders will open on September 12, 2016, exclusively at marvelshop.com, and the figures will ship to customers and to Disney Store locations on or before November 7, 2016. On that date, further pre-orders will open on November 7 at disneystore.com and disneystore.eu. Unmasked Captain America joins the roster of exclusive Marvel Select figures at the Marvel Shop, including Winter Soldier, Black Panther, Unmasked Ant-Man, Hulkbuster Iron Man, Unleashed Hulk and Bleeding Edge Iron Man. And stay tuned for even more exclusive Marvel Select news!