This week, construction continues at comic shops across North America, as more pieces of the Ghostbusters Firehouse arrive as part of Ghostbusters Select Action Figures Series 7! Continuing the new collection based on Ghostbusters 2, these three new figures deliver all-new costumes, accessories and diorama pieces for Ghostbusters fans and collectors, plus one never-before-made character! Read on for more info, then reserve yours at a comic shop near you! Following up on Series 6 — with “We’re Back” Ray Stanz, Geared Up Louis Tully and Vigo the Carpathian — Series 7 offers the following three characters: – “We’re Back” Egon Spengler in his grey jumpsuit, with proton pack, walkie-talkie, ghost trap, proton stream, Santa hat, jar of pink mood slime and the line’s first giga meter, as seen in Ghostbusters 2. – Slime-Blower Winston Zeddemore in his specialized mood-slime-projecting gear, with a pink slime stream and a severed head on a pike, from the ghost train scene in Ghostbusters 2. – Janosz Poha, head of restoration at the Manhattan Museum of Art, with baby Oscar, a lenticular disappearing Vigo painting, and a pair of baby-holding hands for Series 6’s Vigo figure. This is Janosz’s first time in action figure form outside of the Minimates mini-figure line! Each figure features approximately 16 points of articulation, and each additionally comes with a piece or pieces to build the 21.6” wide by 22.7” high by 6” deep firehouse diorama. Depicting the two main doors, sign and cornice of the iconic building, the diorama will require 15 figures to build, and will include signs for Ghostbusters 1 and 2, as well as removable “Hook & Ladder” lettering. 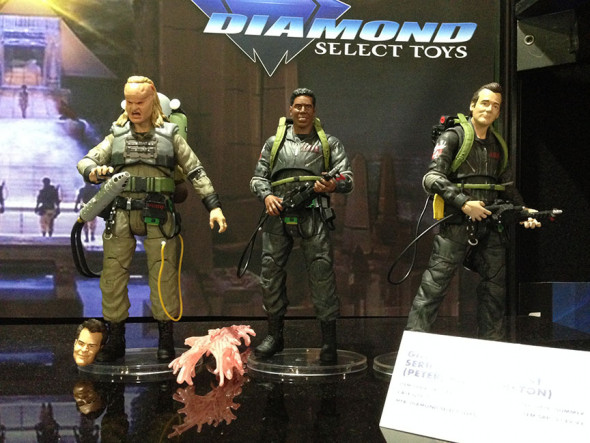 Next in the line, Series 8 recently opened for pre-orders with “We’re Back” Peter Venkman in grey, “We’re Back” Winston in grey, and Slime-Blower Ray Stanz, all of whom should arrive in comic shops this summer. Series 9 and 10 will feature the Real Ghostbusters, from the 1980s cartoon, with Egon, Winston and Slimer in Series 9, and Peter, Ray and a fully articulated 9-inch Stay-Puft Marshmallow Man in Series 10. Each will also come with a piece of the firehouse diorama, and will be offered for pre-order later this year for arrival in winter 2018/2019, at comic shops and specialty stores. To commemorate the completion of the rooftop and the launch of the Ghostbusters 2 line, Diamond Select Toys partnered with animator Alex Kropinak (Marvel’s What The…?!, Twisted ToyFare Theatre) and musician Matt Takacs to create an all-new stop-motion animation, using Ghostbusters Select action figures to re-create one of the original film’s most famous scenes! Track down Series 1-7 at your local comic shop, or order from your favorite online retailer! And pre-order Series 8 today! 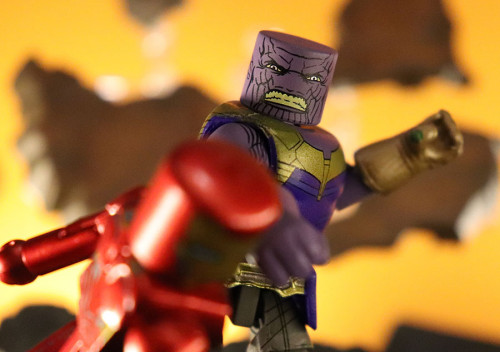 Next Up: The War Reaches Comic Shops with Avengers: Infinity War Minimates!