This week is an explosive one, as the heroes and villains of the Marvel and DC Universes descend on your local comic shop! Flash vs. Red Death! Shazam vs. Darkseid! Iron Man vs. Ebony Maw! Add in a massive Iron Giant bust, and you’ve got a recipe for excitement! Read on for details, then order through your local comic shop or your favorite online retailer! DC Comic Gallery Flash PVC DioramaA Diamond Select Toys release! The DC Gallery line is picking up speed! This 9-inch scale PVC diorama of the Flash racing across a wave is the latest in the DC Gallery line. Made from high-quality plastic, this detailed sculpture delivers the look of a resin statue at a fraction of the price, and is in scale to all Gallery and Femme Fatales PVC dioramas. Flash Fact: It comes packaged in a full-color window box! Designed by Caesar. Sculpted by Joe Menna. (Item #DEC182503, SRP: $45.00) DC Comic Gallery Red Death PVC DioramaHow deadly is your Gallery? The DC Gallery line of PVC dioramas accelerates with another addition to the Dark Nights: Metal series of sculptures – Red Death! With bat-shaped speed lightning whipping around him as he screeches to a halt, this Speed Force-empowered Batman is the perfect addition to any Batman or Flash collection! The 10-inch diorama features detailed paint applications and comes packaged in a full-color window box. Designed by Caesar and sculpted by Alterton! (Item #OCT182228, $45.00) DC Comic Vinimates Series 5 Vinyl FiguresA Diamond Select Toys release! The DC Comics VInimates line keeps going with another assortment of the DCU’s greatest heroes and villains! This new batch includes Justice League member Aquaman in his classic costume, Shazam! in his modern garb, and the ruler of Apokolips – Darkseid! Each 4-inch vinyl figure is sculpted in the Minimates block-figure style, striking a pose straight from the comics, and comes packaged in a full-color window box. Designed by Barry Bradfield! Aquaman Vinimate (Item #JAN192542, SRP: $9.99) Shazam Vinimate (Item #JAN192544, SRP: $9.99) Darkseid Vinimate (Item #JAN192543, SRP: $9.99) Legends in 3D Movie Iron Giant ½ Scale Resin BustThe largest-scale Iron Giant collectible ever made is the newest Legend in Three Dimensions! The Legends in 3D line expands to the world of animation with this 10-inch bust of the Iron Giant, star of the animated film of the same name. With his pal Hogarth perched on his shoulder, this bust is the ultimate gift for any fan of The Iron Giant, or of iron giants in general. Limited to an edition of 1,000 pieces, this numbered bust comes with a certificate of authenticity in a full-color box. Designed by Joe Allard! (Item #SEP182331, $200.00) Marvel Movie Gallery Ebony Maw PVC DioramaA Diamond Select Toys release! The Black Order is here! Joining his fellow acolyte of Thanos, Corvus Glaive, the sadistic telekinetic Ebony Maw is the next Marvel Gallery PVC Diorama! Holding up a finger to hush any who would defy the will of Thanos, Ebony Maw stands approximately 10” tall atop a diorama base and comes packaged in a full-color window box. Sculpted by Cortes Studios. (Item #DEC182508, SRP: $45.00) 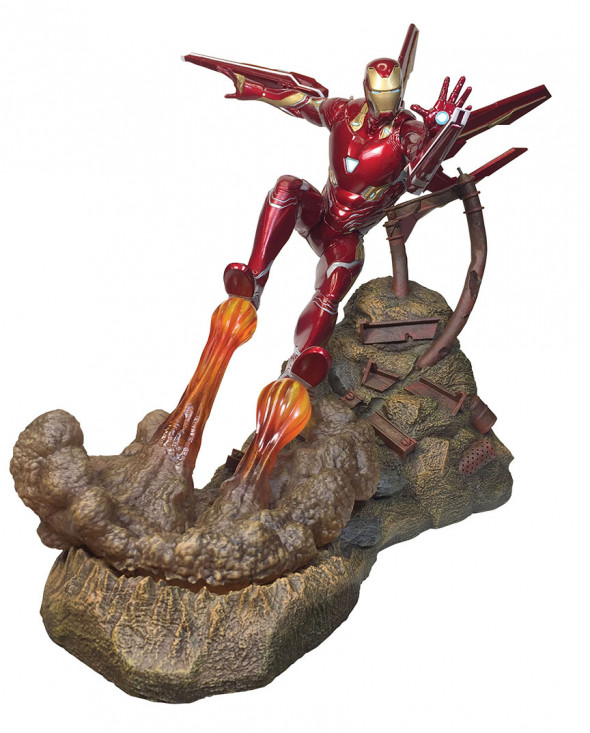 Marvel Movie Premier Collection Avengers Infinity War Iron Man MK 50 Resin StatueRepulsors to full! This resin statue of Iron Man in his MK50 armor shows him landing on a pile of rubble even as he unleashes a blistering barrage at his target. This statue is limited to a production run of 3,000 pieces, and each statue is hand-numbered, with an accompanying certificate of authenticity in a full-color, hand-numbered box. Designed by Joe Allard and sculpted by Gentle Giant Studios! (Item #SEP182340, $150.00) Marvel TV Premier Collection Netflix Daredevil Resin StatueA Diamond Select Toys Release! It’s a stairway to hell! Straight from the infamous fight scene in Marvel’s Daredevil Season 2 on Netflix, this 12-inch scale statue shows a battered Daredevil descending a staircase with duct tape on one hand and a chain in the other. Limited to only 3,000 pieces, it comes with a certificate of authenticity in a full-color box. Designed by Caesar, sculpted by Rocco Tartamella! (Item #NOV182285, SRP: $150.00) 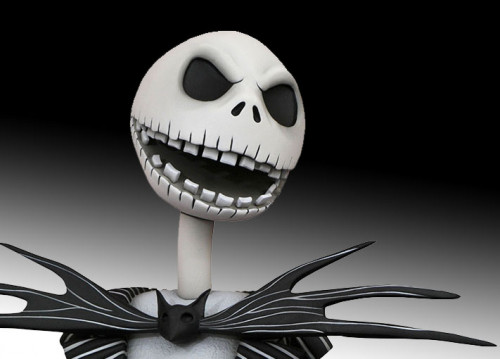 Next Up: Legends in 3D: Jack Skellington