Diamond Comic Distributors and Alliance Game Distributors, Geppi Family Enterprises companies, today announced the launch of Back The Comeback TM, a multi-phased campaign focused on supporting local comic and game stores as they reopen, restart and rebuild. Centered around the rallying cry of, “Our Comeback Will Be Bigger Than Our Setback,” Diamond and Alliance created the campaign in partnership with publishers and industry influencers to shine a light on the unique relationship consumers have with their local comic and game retailers while raising funds to support restart efforts. “To say these last few months have been challenging would be an understatement,” said Steve Geppi, Chairman and CEO, Geppi Family Enterprises. “I have heard from many retailers and everyone is excited about safely reopening, restarting and rebuilding. I truly believe that our comeback will be bigger than our setback and am excited to kick off this campaign in support of our industry and our retailers.” Back The Comeback launches today with a social media challenge. In a video message posted on Twitter via @backthecomeback, Facebook via backthecomeback as well as various YouTube channels, Steve Geppi challenges five friends to #BackTheComeback and post messages of support for their favorite comic or game store while asking their friends and fans to do the same. Viewers can visit backthecomeback.com for additional information including tools to help make their own social messages and a link to purchase campaign T-shirts. All proceeds from T-shirt sales will be distributed to charities that support comic and game stores. 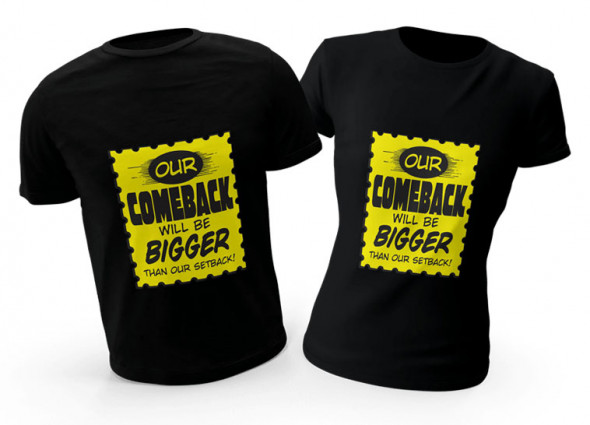 The second phase of this campaign begins later this summer when Diamond International Galleries (DIG) launches a Back The Comeback charity auction. Steve Geppi has kicked off donations to the auction with items valued at approximately $50,000. The winning bidders will donate directly to one of three charities that support comic and game retailers and submit proof of donation to DIG to claim their item. The third phase of this campaign focuses on in-store promotion. Alliance will offer weekly promotions to retailers and Diamond will partner with publishers to place the Back The Comeback logo on the cover of select comics to commemorate this time period and the emphasis on rebuilding. More information on these additional phases of the campaign will be released in the coming weeks. “My hope is that Back The Comeback will reassure our retailers that our community is here to support them,” said Steve Geppi. “I am proud to collaborate with industry colleagues on this campaign to spread the word about Back The Comeback so that together, our comeback will be bigger than our setback.” Back The Comeback is a multi-phase support effort Diamond and Alliance are spearheading in response to the global pandemic. More information on Back The Comeback can be found here. Charity recipients include: • Book Industry Charitable Foundation • Jack Vasel Memorial Fund • Comic Book Legal Defense Fund About Geppi Family Enterprises Geppi Family Enterprises (GFE) has served as the nexus of comics and pop culture since 1982. GFE is comprised of 11 brands in the US and the UK, including Diamond Comic Distributors and Alliance Game Distributors. GFE provides a multi-channel platform of publishing, marketing and fulfillment services, coupled with an unparalleled global distribution network for retailers, publishers and vendors. What started as one man’s hobby, with a single warehouse and 17 retail customers, has evolved into the Geppi Family Enterprises of today: the largest distributor of English language comics, graphic novels and pop culture related merchandise worldwide. BACK THE COMEBACK and the BACK THE COMEBACK logo are trademarks of Diamond Comic Distributors, Inc. © 2020 Diamond Comic Distributors, Inc. All Rights Reserved.