The Legends in 3D bust line continues with the Dark Knight himself, from Batman: The Animated Series, and this is where you’ll find bonus images of him that aren’t on the box! Check out the 10″ half-scale resin bust, then reserve yours at your local comic shop! Legends in 3D Animation Batman 1/2 Scale bust JAN202449, SRP: $200.00 A Diamond Select Toys release! Pay tribute to the Legend of the Dark Knight with this half-scale bust of Batman, as he appeared in Batman: The Animated Series! Part of the Legends in 3D line of busts, this approximately 10-inch portrait is limited to only 1,000 pieces, and comes packaged in a full-color box with a hand-numbered certificate of authenticity. Designed by Joe Allard, sculpted by Varner Studios. Find a store near you at comicshoplocator.com! 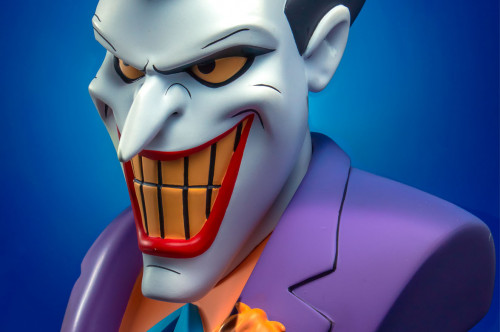 Next Up: Legends in 3D: The Joker