Winter is coming and so are ten new items for pre-order! This month, old favorites are back and never before seen characters are solicited at Diamond Select Toys and Gentle Giant Ltd., including the highly requested Muppets Sam the Eagle and Rizzo the Rat Action Figures! Read on for details, and pre-order through your local comic shop, or at diamondselecttoys.com! 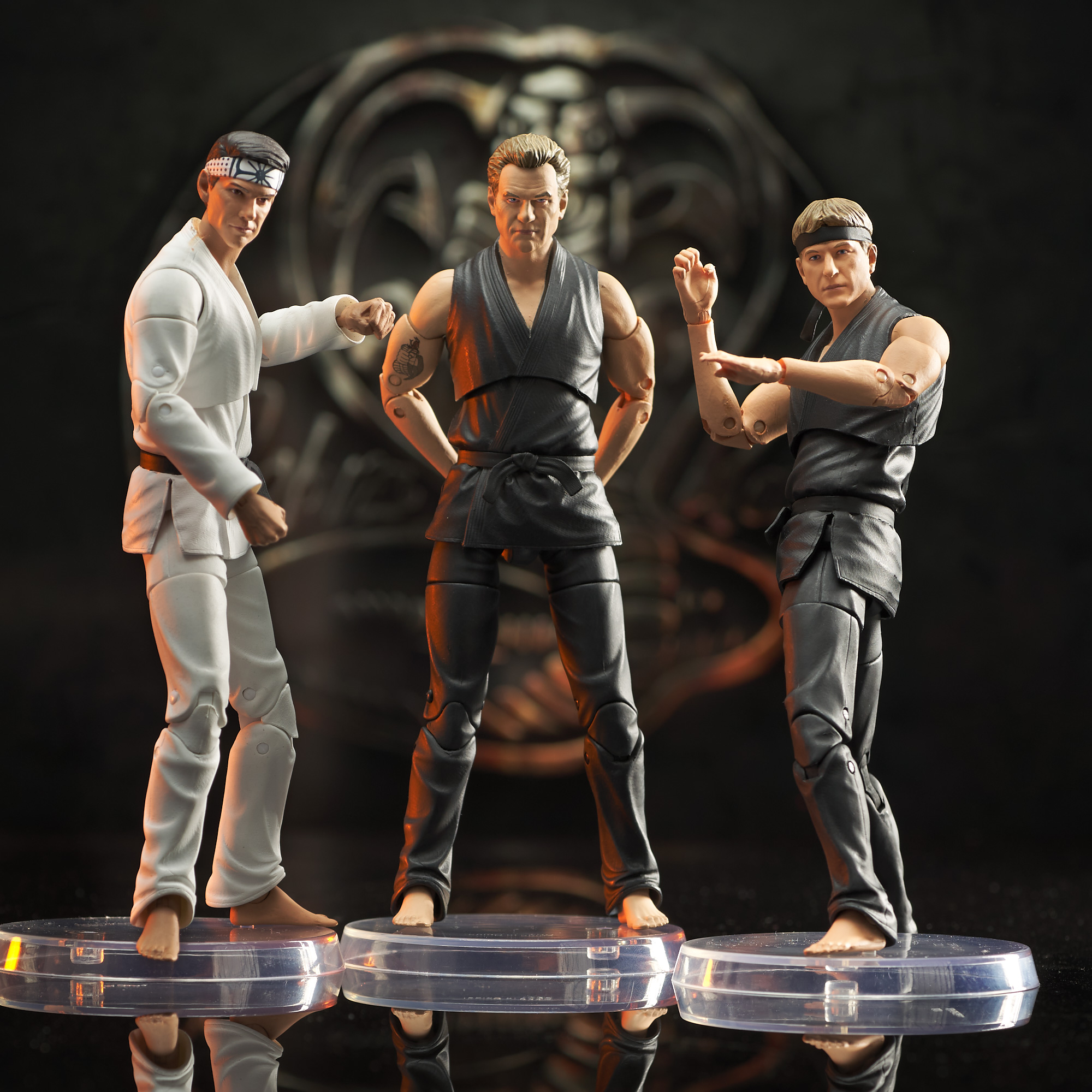 Diamond Select Toys release! Sweep the leg! A follow-up to the classic film The Karate Kid, the hit Netflix TV series Cobra Kai is now a series of deluxe action figures from DST! Each 7-inch figure – Johnny Lawrence, Danny LaRusso and John Kreese – features over 16 points of articulation, plus interchangeable hands for a variety of martial arts moves. Packaged in a full-color window box.
Sculpted by Chris Dahlberg and Rocco Tartamella.
SRP: $24.99/ea. 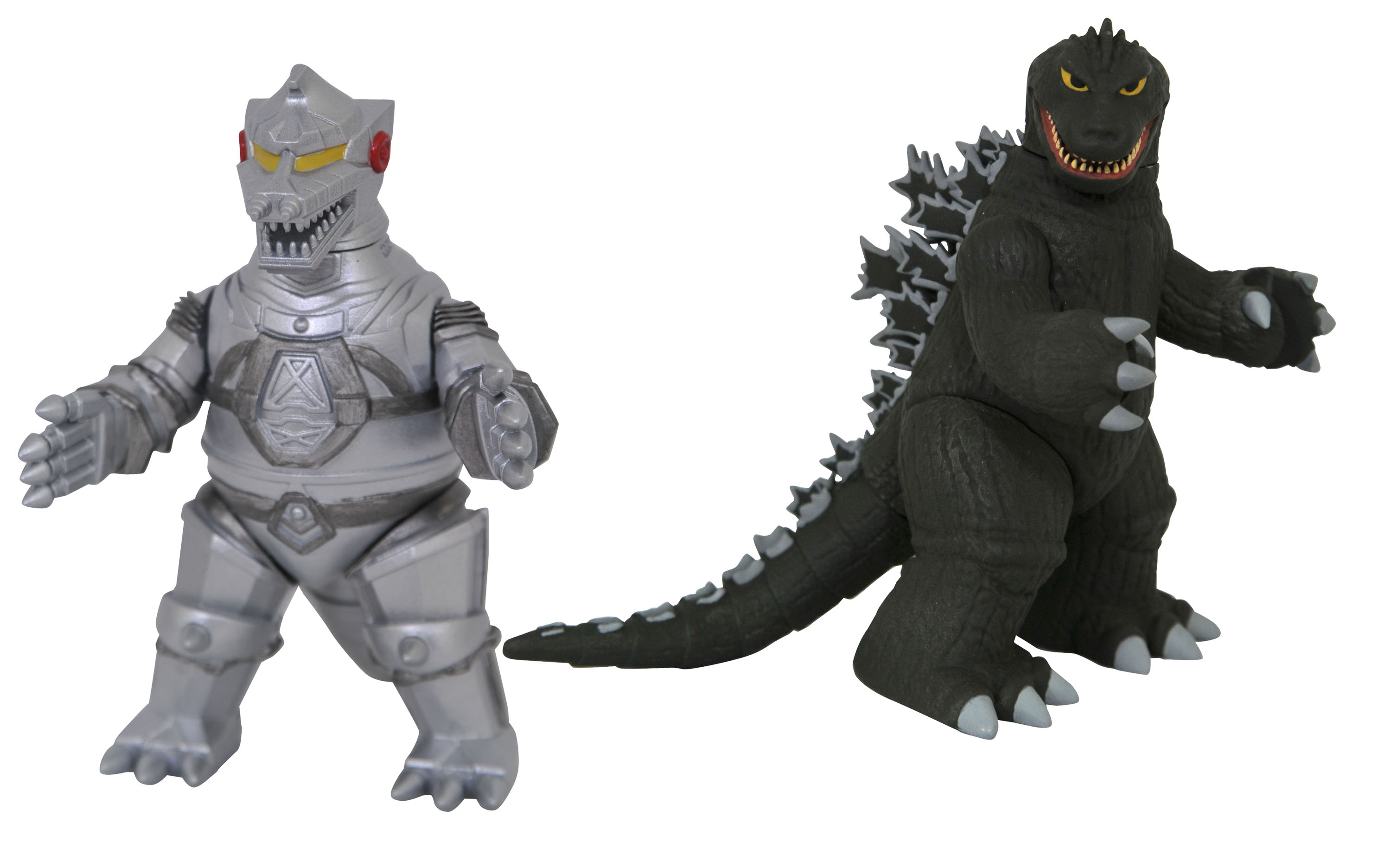 A Diamond Select Toys release! It’s the return of Godzilla! The popular Godzilla Vinimates 4-inch vinyl figures are back in a series of two-packs, pairing past with present, and pitting enemies against each other! Godzilla 1954 meets his future counterpart, Godzilla 1999! Godzilla 1962 faces off with Mechagodzilla! Burning Godzilla 1995 teams up with Rodan! Each 4 inch figure features an articulated neck, and comes packaged in a full-color window box built for two!
Designed by Barry Bradfield!
SRP: $19.99/ea 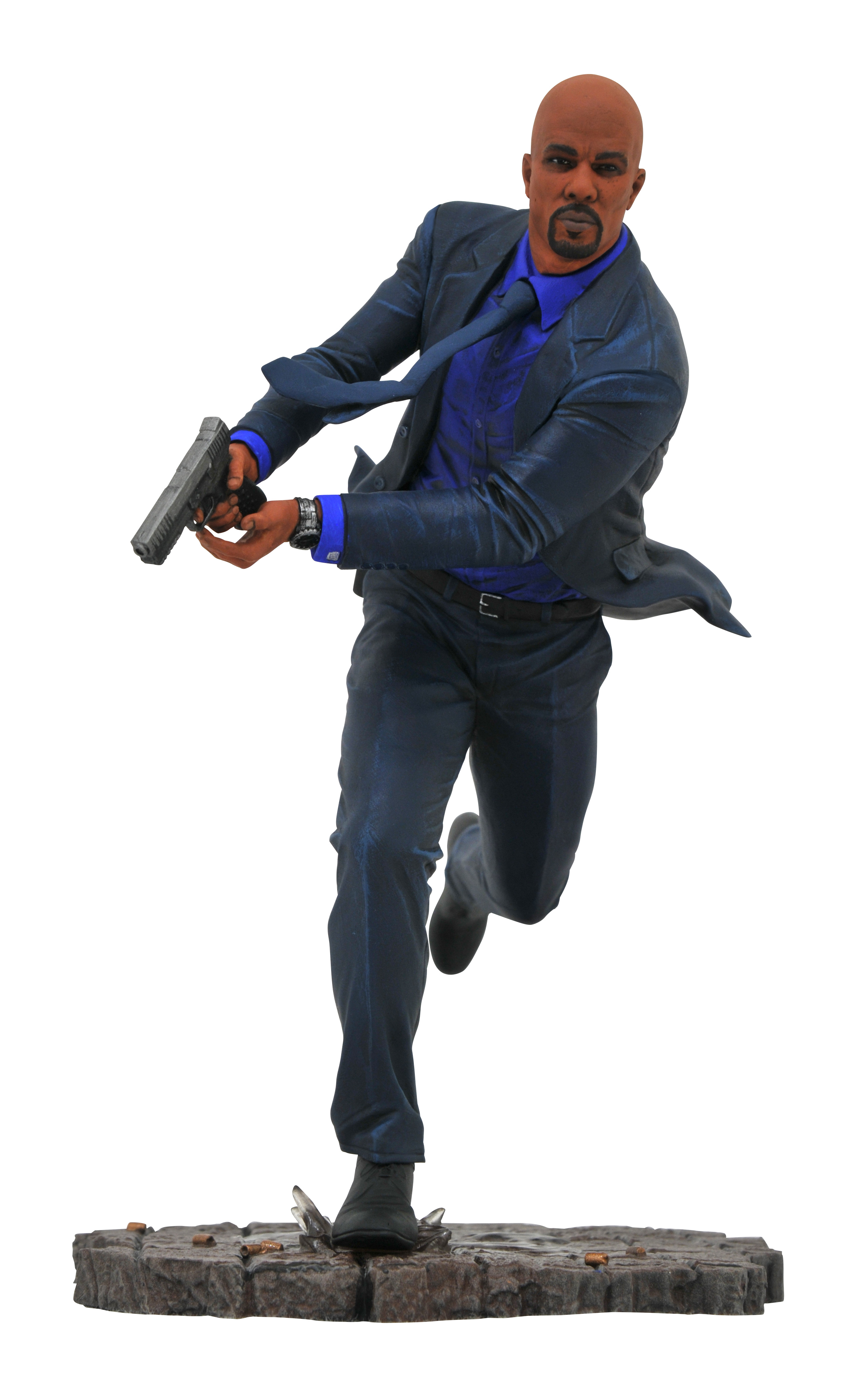 A Diamond Select Toys release! Cassian is chasing down John Wick in this all-new Gallery Diorama! Depicting the hitman and bodyguard running full-tilt with his weapon drawn, this approximately 9-inch sculpture is based on his appearance in John Wick Chapter 2 and bears the likeness of actor Common. Cast in high-quality PVC, this diorama features detailed sculpting and paint applications and comes packaged in a full-color window box.
Designed by Caesar, sculpted by Rocco Tartamella.
SRP: $49.99 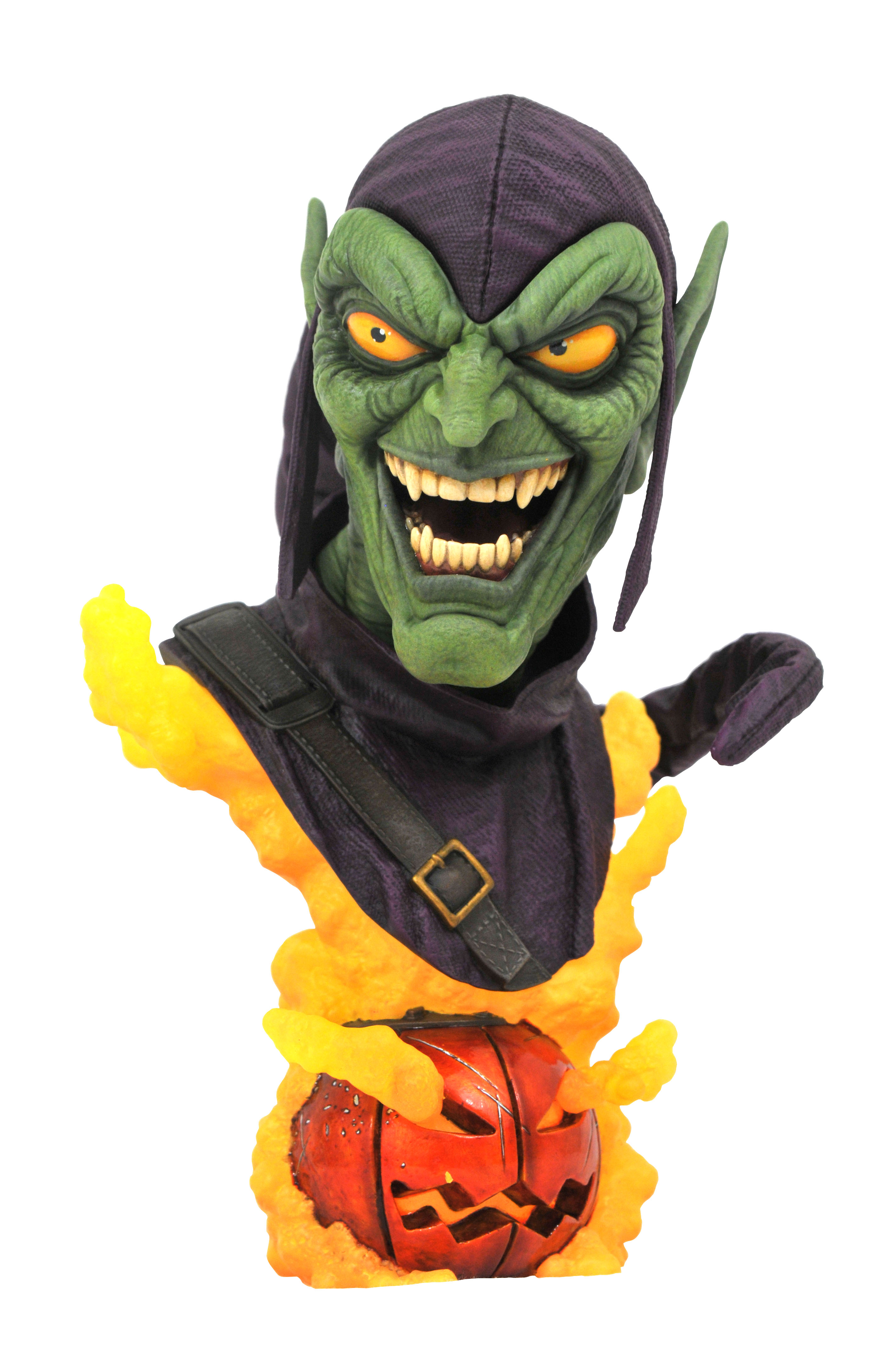 A Diamond Select Toys release! The Green Goblin is now a Legend in 3 Dimensions! The iconic Spider-Man foe gets the ½ Scale bust treatment with this all-new sculpture, capturing the grinning villain atop a smoking pumpkin bomb pedestal. Limited to only 1,000 pieces, it comes packaged with a numbered certificate of authenticity in a full-color box.
Designed by Joe Allard, sculpted by Alterton!
SRP: $175.00 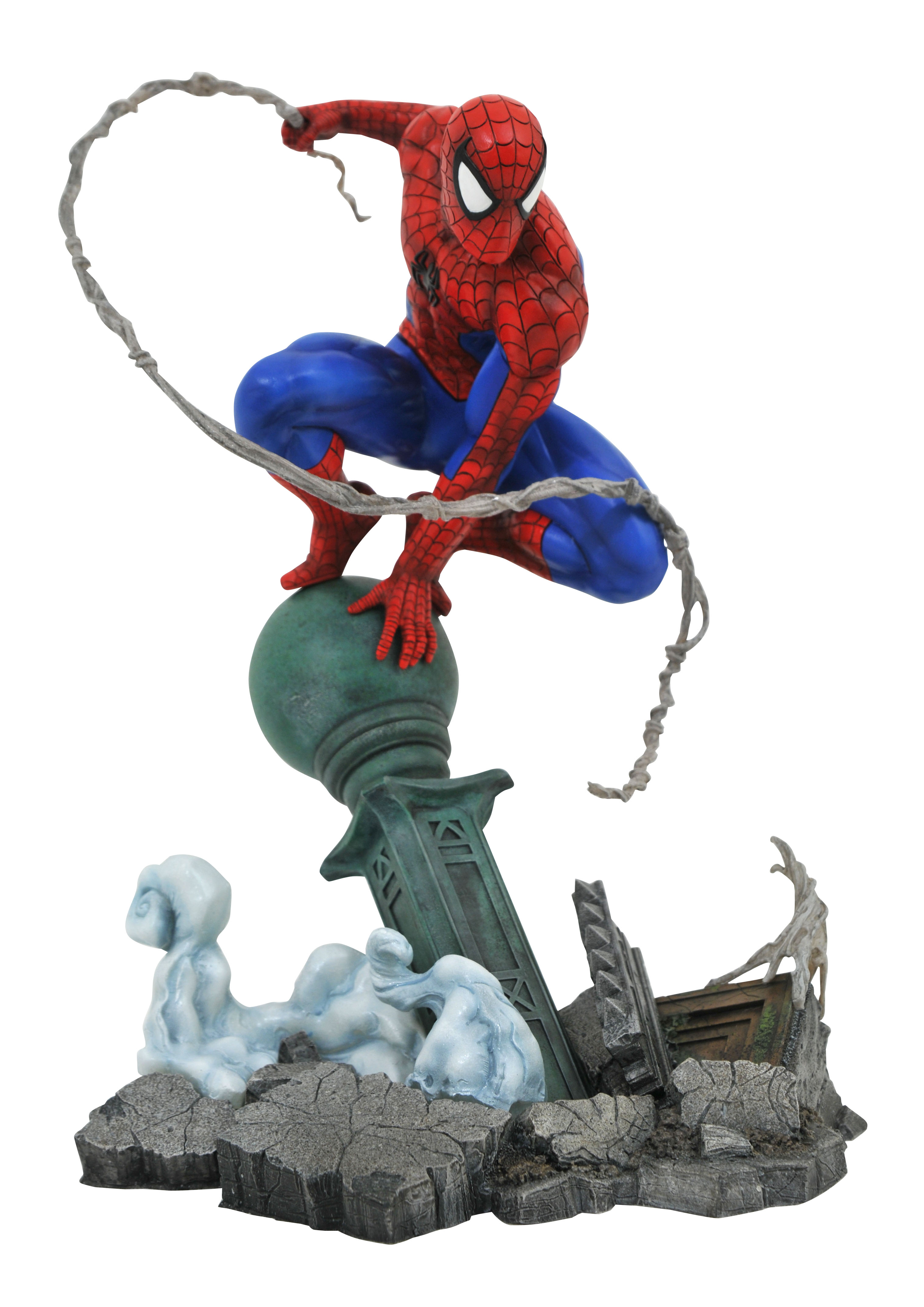 A Diamond Select Toys release! The battle continues! Spider-Man joins the fight in the newest entry in a new sub-line of Marvel Gallery Dioramas, perching atop a lamppost over a rubble-strewn environment. Designed to display on its own or with others in the series, this approximately 10-inch sculpture is made of high-quality PVC and features detailed sculpting and paint applications. Packaged in a full-color window box.
Designed by Nelson X. Asencio and hand-sculpted by Jean St. Jean!
SRP: $49.99 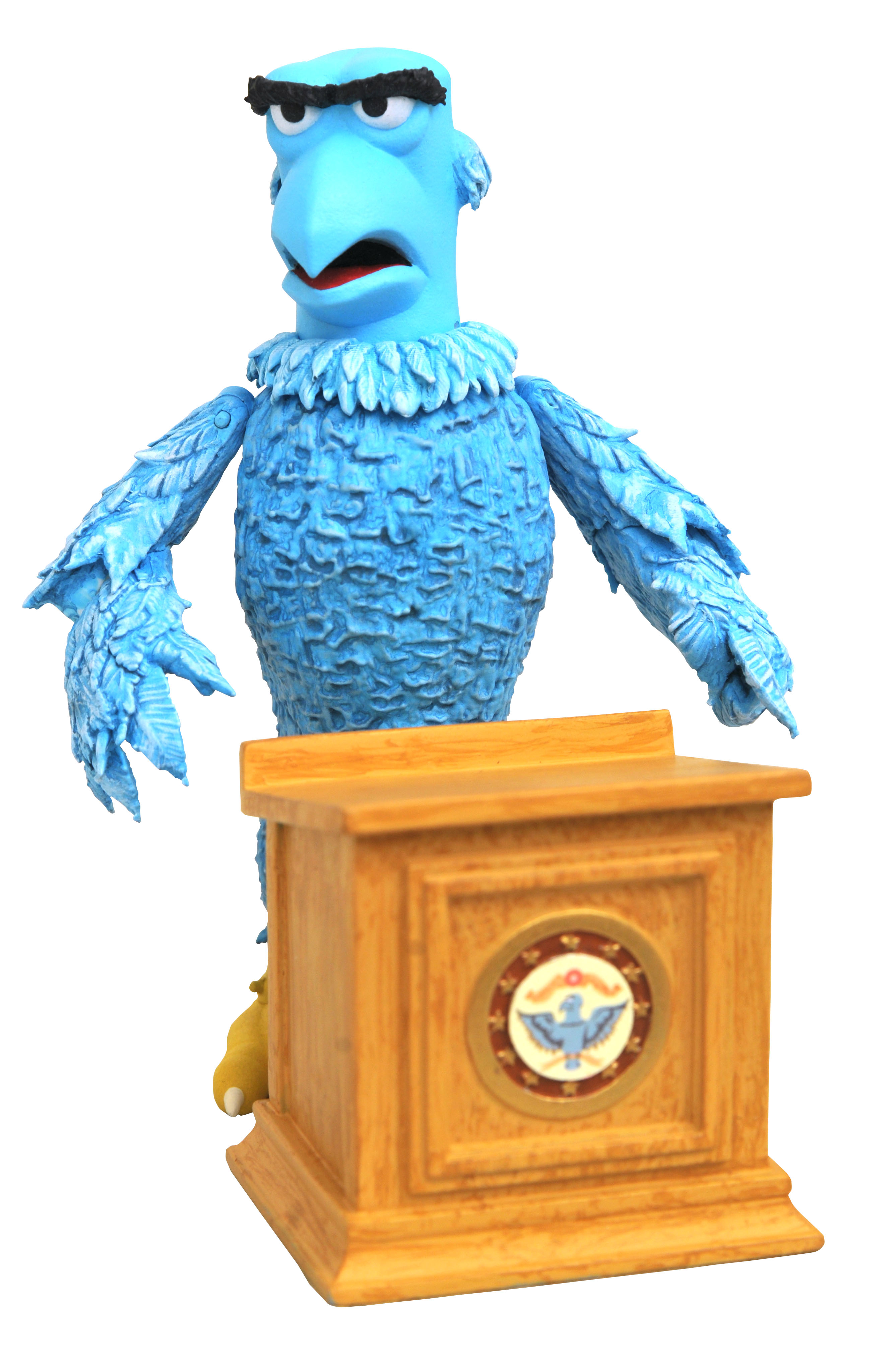 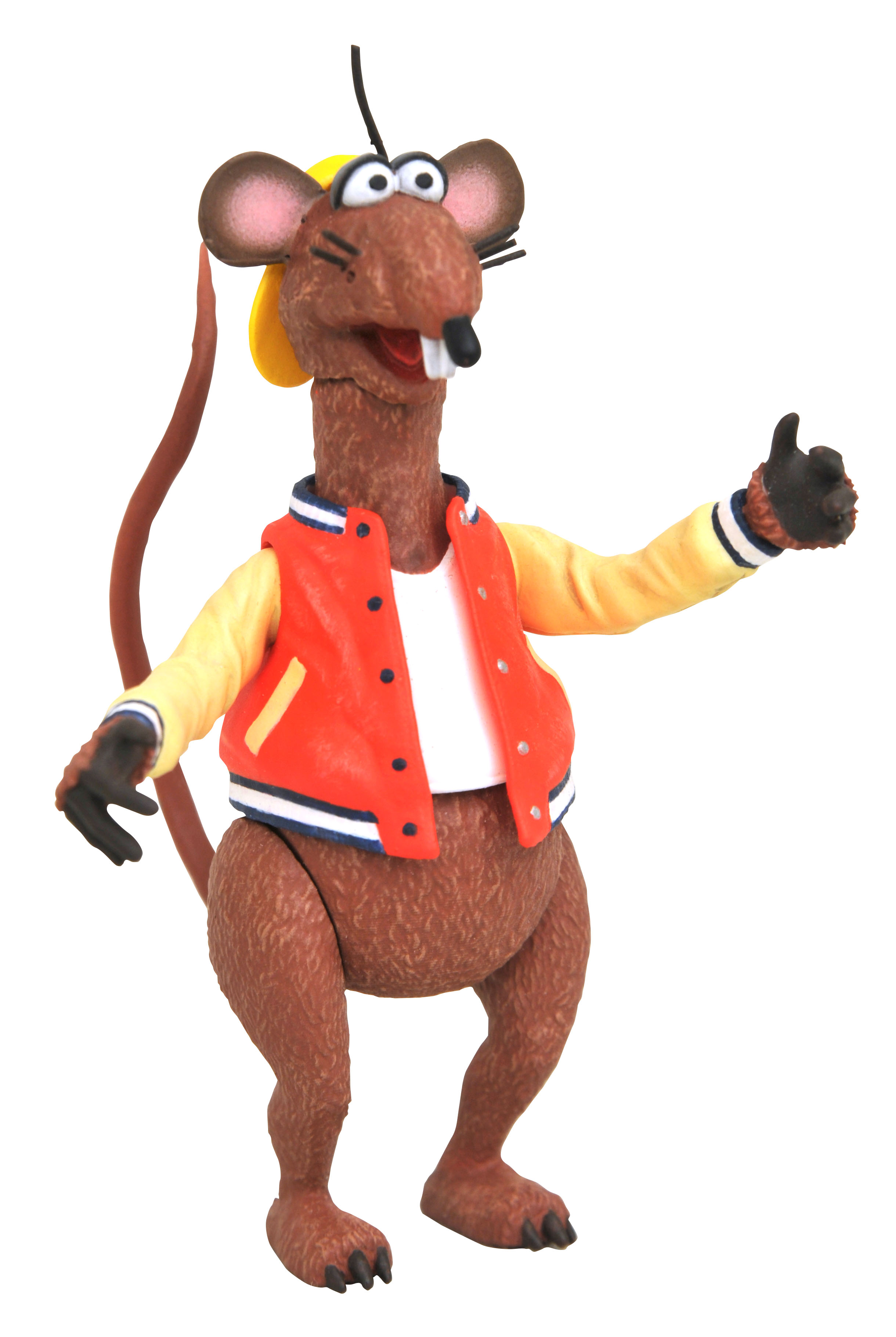 A Diamond Select Toys release! It’s the American Way! The next Muppets action figure has arrived, and it’s Sam the (American) Eagle! Plus, as a bonus you get Rizzo the Rat! These 7-inch scale action figures measure 5 inches and 3 inches, respectively, and each includes multiple points of articulation. Accessories include a podium (with Sam’s presidential seal), spotlight, phonograph, easel and in-scale “Sam for President” poster! Together they come packaged in a full-color window box.
Sculpted by Gentle Giant Studios.
SRP: $29.99 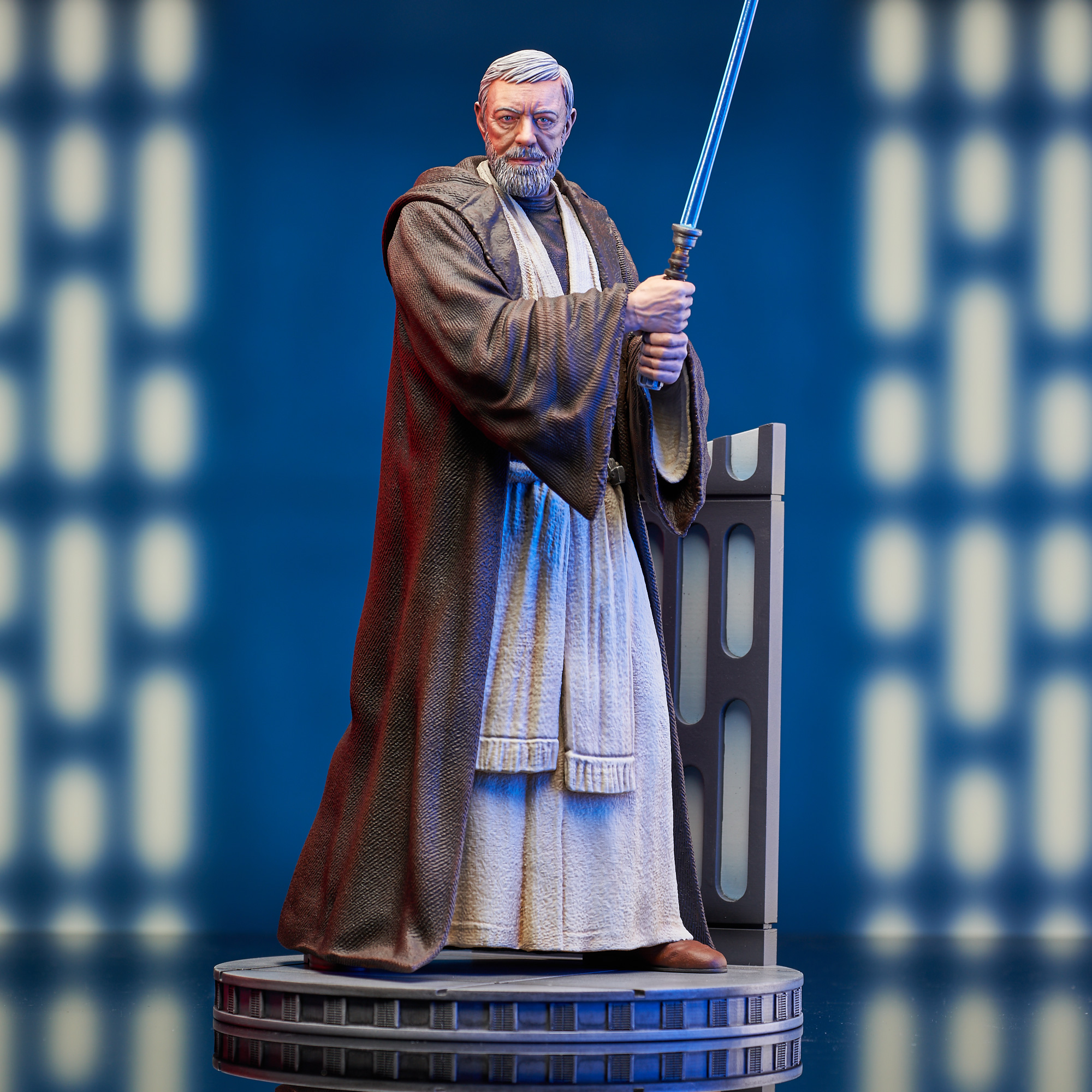 A Gentle Giant Ltd. release! Relive the magic of A New Hope with this all-new statue of Obi-Wan Kenobi in his Episode 4 look! Captured during his battle with Darth Vader aboard the Death Star, with his lightsaber energized, this approximately 12-inch statue features detailed sculpting and paint applications, and is limited to only 2000 pieces. It comes packaged in a full-color box with a numbered certificate of authenticity.
Designed by Elliot Fernandez, sculpted by Gentle Giant Studios!
SRP: $250.00 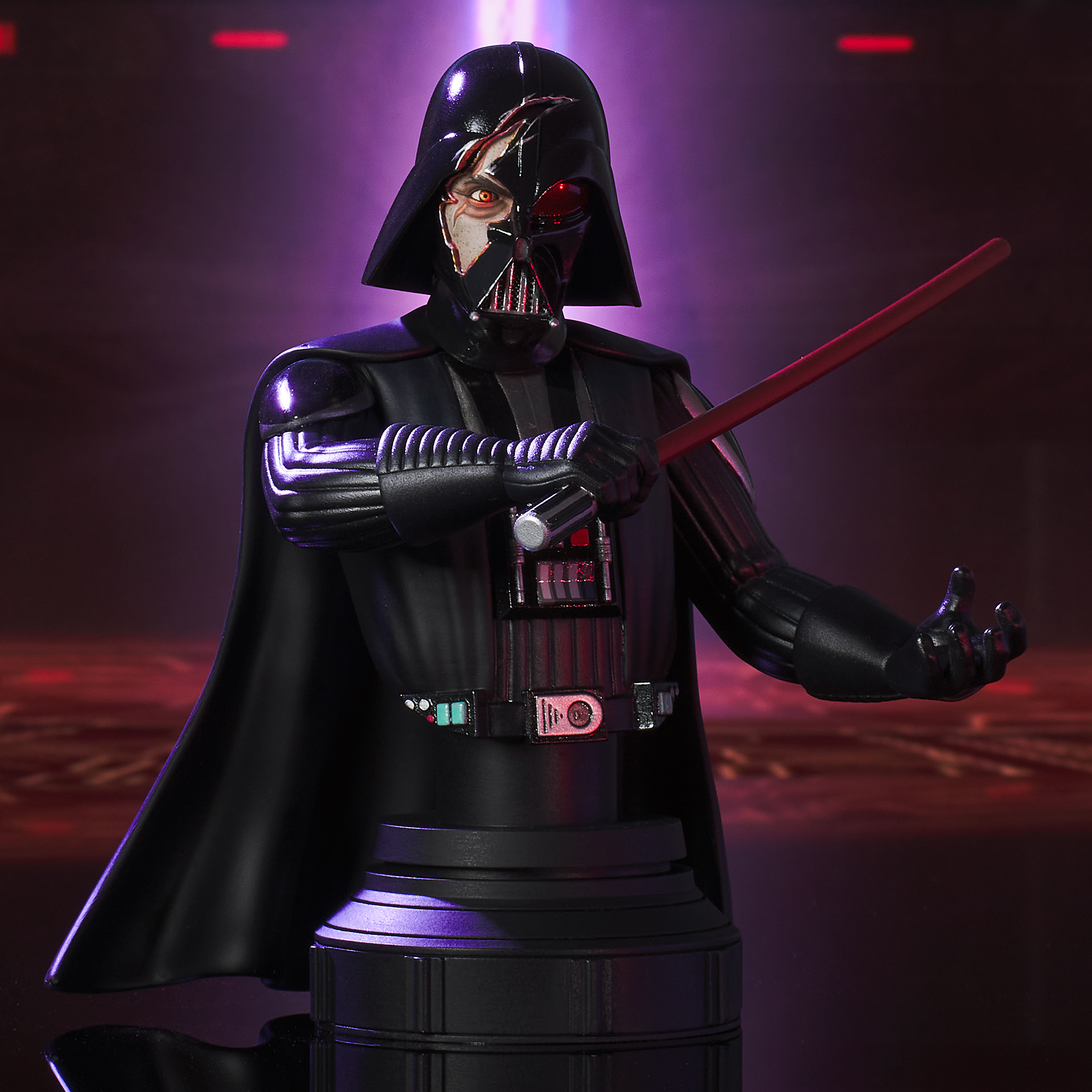 A Gentle Giant Ltd. Release! Rebels beware! This all-new bust of Darth Vader, Dark Lord of the Sith, captures him as he appeared in the Rebels animated series, with his red-tinted lenses and red lightsaber activated. This deluxe 6-inch bust is limited to only 3,000 pieces, and comes packaged in a full-color window box with a numbered certificate of authenticity.
Designed by Barry Bradfield, sculpted by Paul Harding!
SRP: $125.00 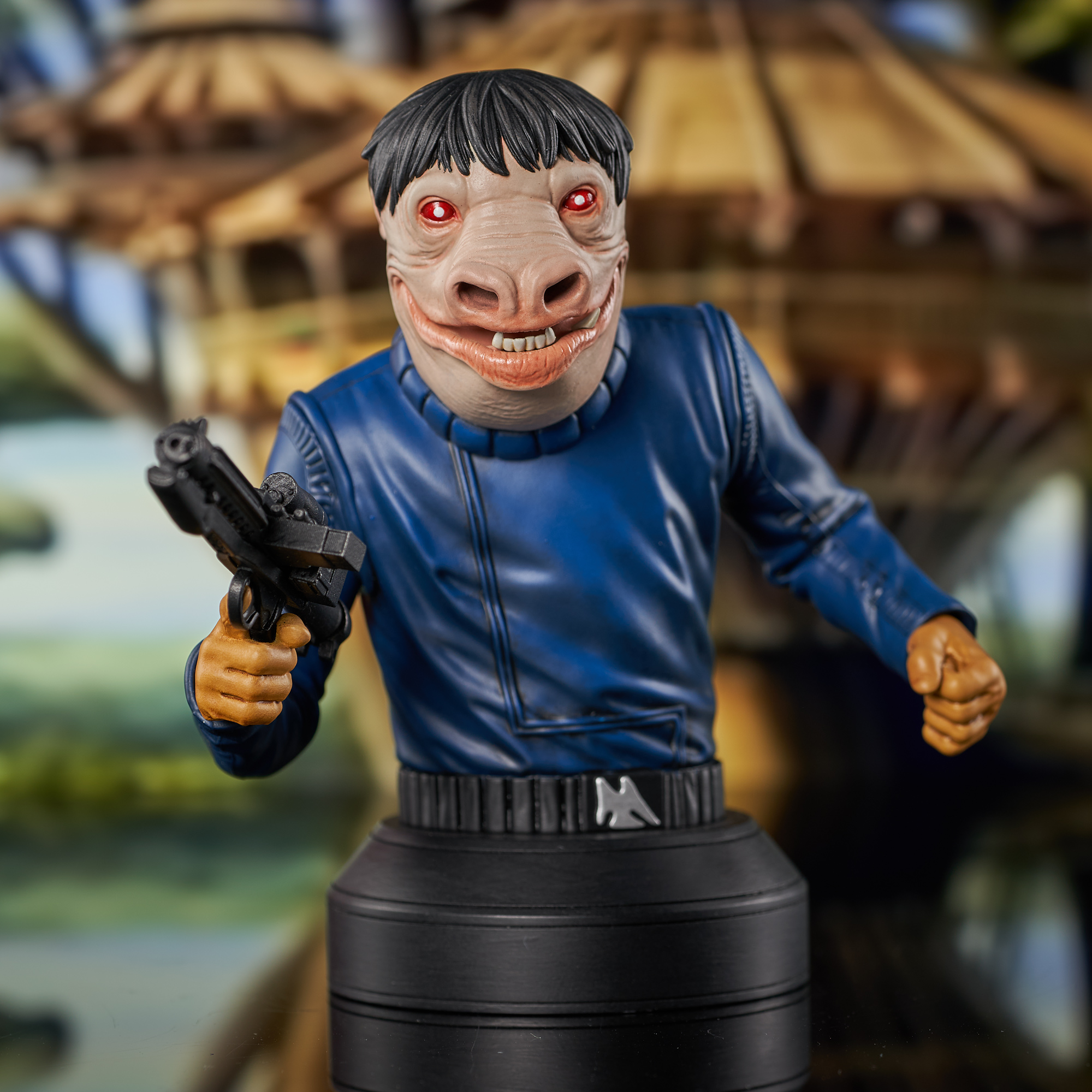 A Gentle Giant Ltd. release! Only available in the Sears Cantina Adventure Set, Blue Snaggletooth was somewhat of a rarity for vintage action figure collectors. Now, he’s the newest 1/6 Scale Bust in the Star Wars line! His real name a mystery, this approximately 5-inch bust shows the Snivvian with his blaster drawn, and is limited to only 2000 pieces. It comes packaged in a full-color box with a numbered certificate of authenticity.
Designed by Leo Silva, sculpted by our own in-house team of professional artists!
SRP: $120.00 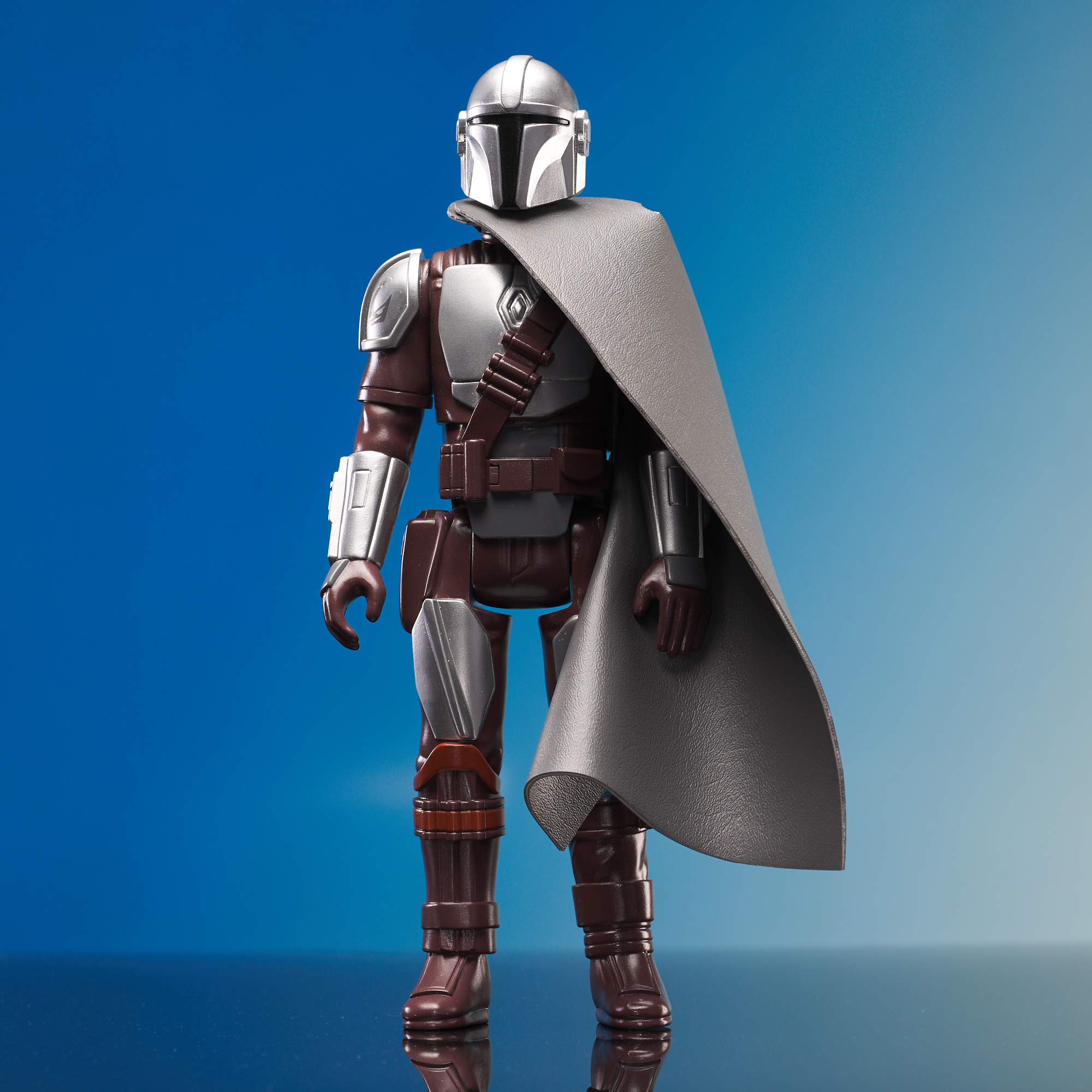 A Gentle Giant Ltd. release! What’s new is old again! One of the newest heroes in the Star Wars universe is captured in the classic action figure style in this all-new 1/6 scale, 12-inch action figure. Featuring a blaster and a jetpack, this figure features his shiny Beskar armor, and comes packaged on retro card art in a resealable clamshell blister.
Designed by Eamon O’Donoghue, sculpted by our own in-house team of professional artists!
SRP: $80.00