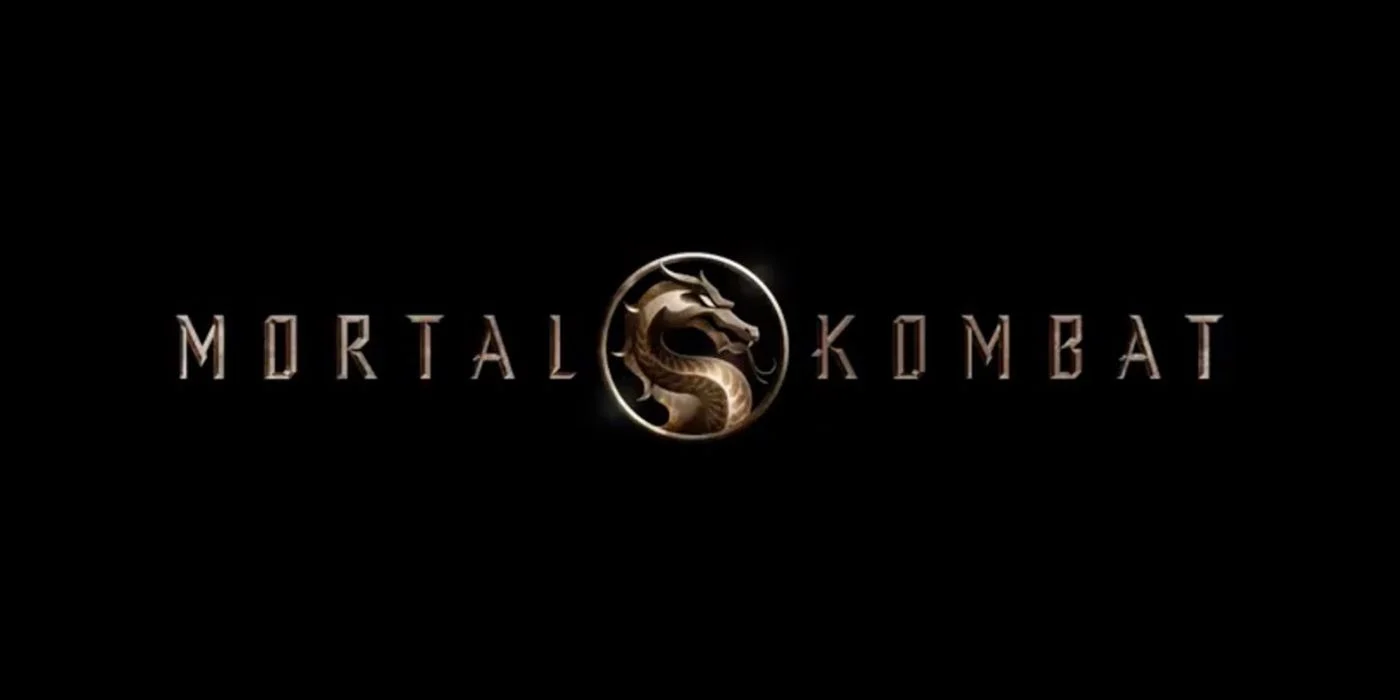 From the minds of New Line Cinema comes the live-action remake of the ever-popular intergalactic fighting game, Mortal Kombat! The movie features an amazing list of producers, such as James Wan of “The Conjuring” franchise, Todd Garner of the comedy “Tag”, Simon McQuoid, and E. Bennett Walsh of “The Amazing Spider-Man 2.” The Mortal Kombat reboot introduces us to Cole Young, who is hunted down by Sub-Zero, Emperor Shang Tsung’s greatest warrior for reasons unbeknownst to the young MMA fighter. Cole is trained by legendary Mortal Kombat warriors in preparation for the tournament of the century, premiering April 23rd in theaters and on HBOMax! Fans anticipate exhilarating fight scenes and hope to see familiar martial arts techniques and weapons portrayed in the film that they’ve come to appreciate from the video game franchise.

Main Characters and their Weapons of Choice- We delved into the Mortal Kombat Universe for a look at the main characters’ choice of weapons! While we don’t know what will be featured in the new Mortal Kombat film, we know what weapons they’ve wielded in other media! Read more about the weapons and vote which one you would win at the end!

Sonya Blade: General Sonya A. Blade is a member of the United States Special Forces for Earthrealm. As the first female Mortal Kombat character, she made her debut in the Mortal Kombat arcade game in 1992 and is one of the original characters still featured in the games today.

Energy Bracelets: This weapon is most notably used by Sonya Blade. Sonya has the power to fire and manipulate projectiles made of pink-colored energy through the use of high-powered weapons attached to her wrists.

Scorpion: An original member of the Mortal Kombat games, debuting in 1992, Scorpion is also known as Hanzo Hasashi. A fierce warrior of Japan, Scorpion becomes a ninja specter (a creature resembling a zombie who rises from the grave) seeking revenge for his death at the hands of Bi-Han (Sub-Zero), who was part of a rival Chinese ninja clan. He also has the ability to withstand and shoot fire at his enemies.

Kunai (Scorpion’s Spear): The kunai are Japanese fighting knives repurposed from farming tools into a weapon, which has changed forms over the years from a simple knife with a loop at the end of the handle to an explosive throwing knife in Mortal Kombat X. Scorpion’s Spear, a small spear-like Kunai knife attached to a chain, is the ninja specter’s weapon of choice, which darts out of his palm for ease of use in combat.

Sub-Zero: Mortal enemy to Scorpion, Bi-Han, better known as Sub-Zero, made his original Mortal Kombat debut in 1992. Part of the Chinese ninja clan Lin Kuei, Sub-Zero is a descendant of the Cryomancers and has the ability to control and use ice. He is responsible for the death of his rival, Scorpion, which leaves him to be hunted by the fiery specter whose sole purpose is now to seek revenge. He is lived on by his younger brother and successor, Kuai Liang.

Kori Blade: Sub-Zero’s weapon of choice in most appearances is the Kori Blade after it was introduced in Mortal Kombat: Deadly Alliance. Derived from the Japanese word “koori”, meaning ice, this blade is long, thick, double pronged, and fashioned from frozen water vapors. It’s perfectly fitting for a descendant of Cryomancers.

Raiden: As one of the original seven and a significant character in the game (appearing in every single iteration), Raiden is the thunder god and elected protector of Earthrealm. He is based on Raijin, an ancient Japanese God of thunder, lightning, and storms.

Staff of Raiden: The god’s weapon of choice is his staff, which he uses in combat to strike lightning on his enemies. A gift from the Elder Gods, the staff is resistant to electric currents and has changed forms from a wooden staff to a metallic staff with sharp spikes protruding from the top.

Mileena: Princess Kitana’s evil twin, Mileena is a genetic experiment created by Shang Tsung, a sorcerer. Most known for her choice of weapons, Mileena uses two sai blades and is dubbed the “dual sai-wielding assassin.”

Sai: This blade is an ancient traditional melee dagger that has one main prong and two shorter curved prongs near the handle. Used in pairs, the sai is good for up close combat and blocking enemy attacks. 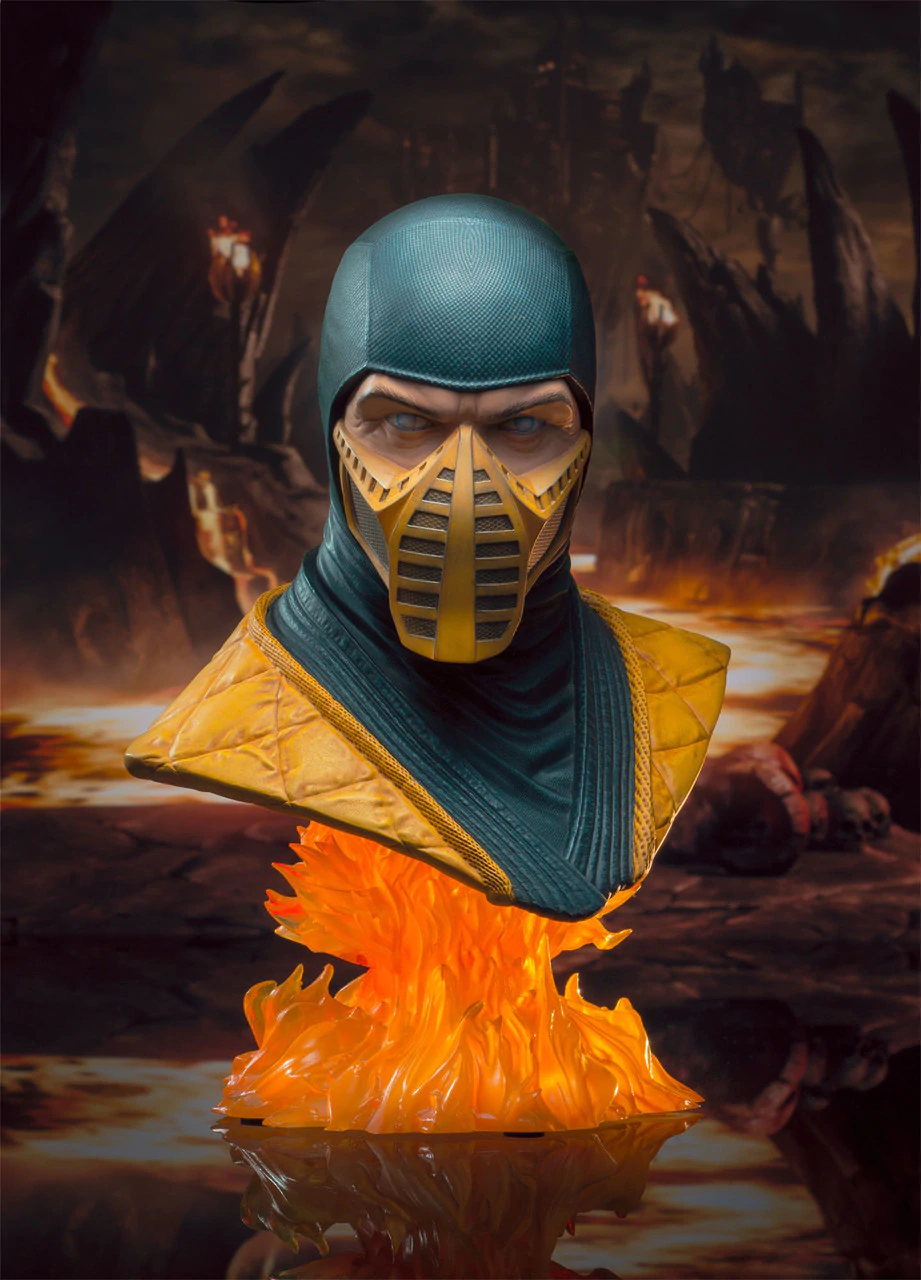 Based on the fire-wielding, undead, demonic specter, this killer bust of Scorpion is a fantastic addition to anyone’s Legends in 3D half-scale bust collection! Measuring approximately 10 inches tall, and inspired by his earliest video game appearances, the bust features detailed sculpting and paint applications and is limited to only 1000 pieces. Packaged with a certificate of authenticity in a hand-numbered, full-color box. Order yours before they’re gone at http://bit.ly/DSTSCORPION or find a local comic shop near you using comicshoplocator.com. 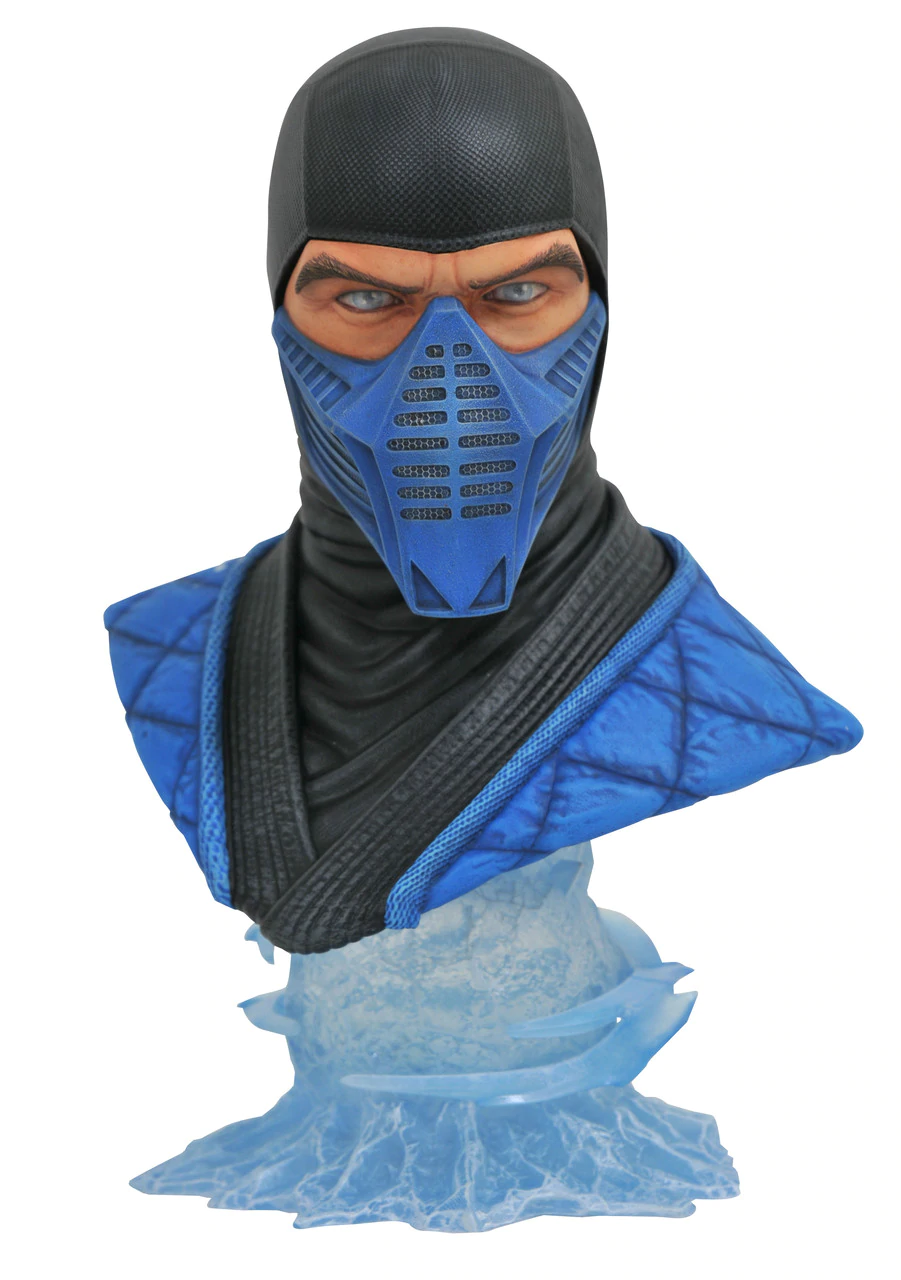 Fatality! This killer bust of Sub-Zero is part of the Legends in 3D line of half-scale busts! Measuring approximately 10 inches tall, the bust features detailed sculpting and paint applications and is limited to only 1000 pieces. Packaged with a certificate of authenticity in a hand-numbered, full-color box. Pre-order yours before they’re gone at http://bit.ly/Sub-ZeroL3D or find a local comic shop near you at comicshoplocator.com! 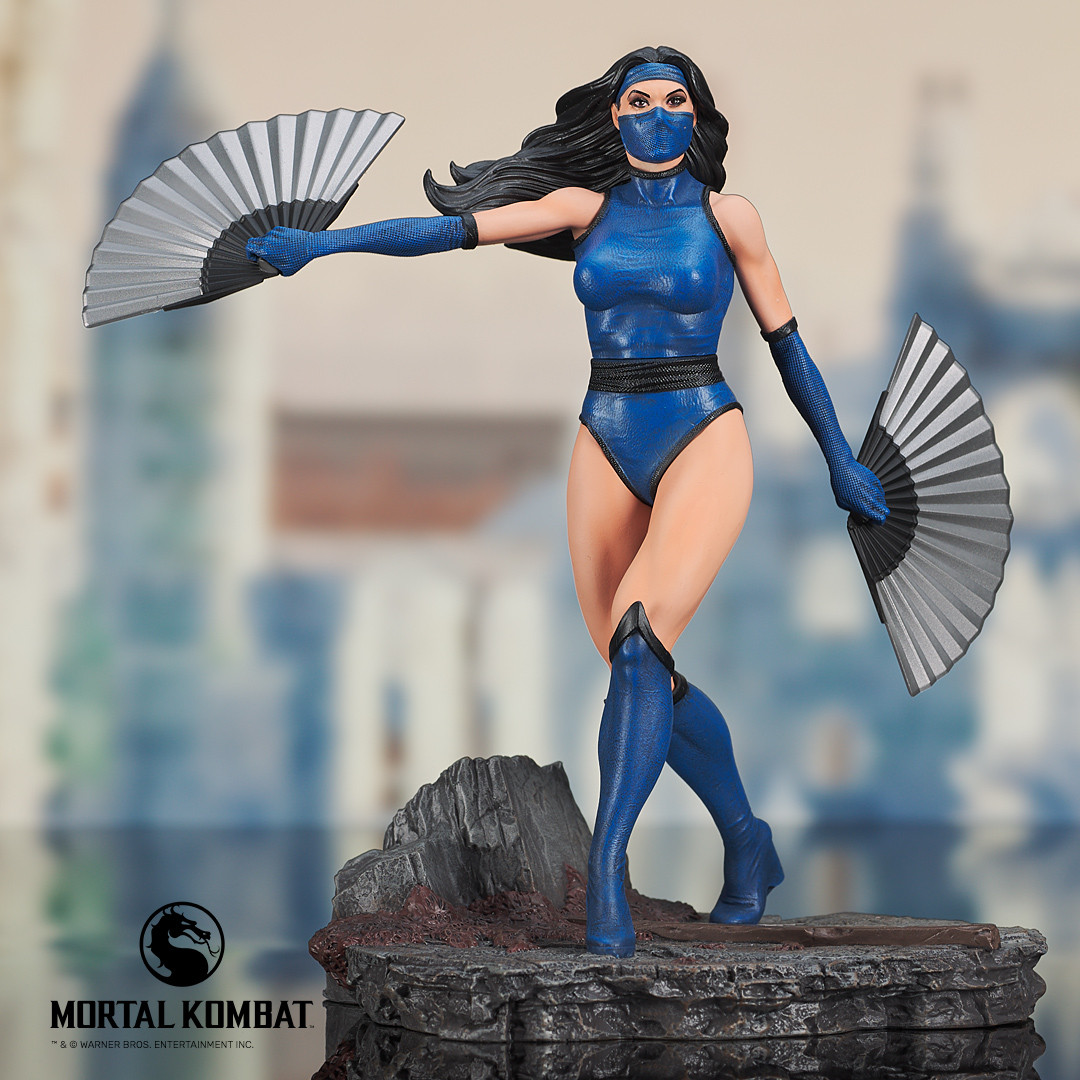 From the Mortal Kombat 11 video game, Kitana is part of the Gallery lineup wielding her twin steel fans. Standing about 11 inches tall, Kitana features detailed sculpting and paint applications and comes packaged in a full-color window box. Find a local comic shop near you at comicshoplocator.com! 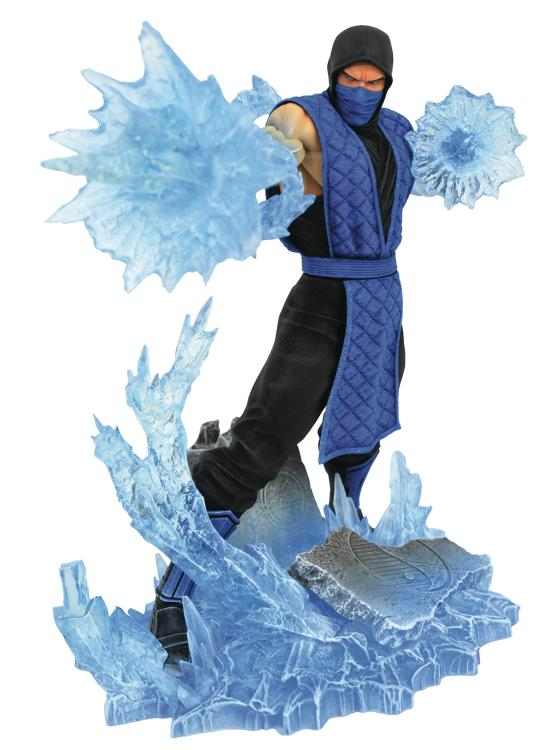 Everybody freeze! The cold as ice Sub-Zero is the first among the Mortal Kombat Gallery Diorama line! Posed as he launches a frosty attack, this approximately 9-inch diorama is made of high-grade PVC and comes packaged in a full-color window box. More will be available this summer! 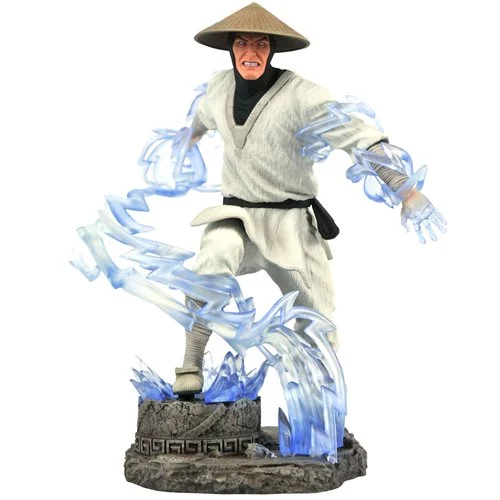 The Kombat continues! The next entry in the knockout Mortal Kombat line of Gallery statues is none other than Raiden himself, protector of Earth! Based on his appearance in the original 1992 video game, this approximately 10-inch diorama sees him drawing up electricity from the earth to launch a lightning attack! Made of high-quality plastic, it features detailed sculpting and paint applications, and comes packaged in a full-color window box. Arriving in June 2021!